REVIEW: Wendy and the Lost Boys 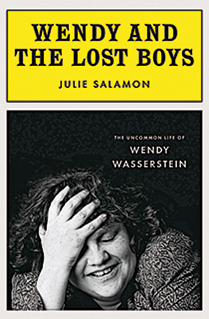 During the 1980s, Wendy Wasserstein became famous writing plays about women like herself—Ivy League-educated, smart, funny, conflicted urbanites grappling with love, career and motherhood who were affluent enough to pay $60 to watch themselves on Broadway. The Pulitzer Prize winner, who died of cancer in 2006 at age 55, blazed trails as the first female playwright to win a Tony. But, as Julie Salamon reveals in her doggedly researched biography, the popular, warm, never-married celebrity was also a complex enigma who surprised even close friends when she gave birth at age 48 to daughter Lucy Jane and then successfully hid her deadly disease. Salamon deftly chronicles Wasserstein’s complicated relationships within her upwardly mobile Polish immigrant family, her time at the Yale School of Drama, where classmates included Meryl Streep, her rise in New York theatre and society, abetted by brilliant networking skills and gravitation to power (Frank Rich, then the New York Times’ theatre critic, became a close friend). There’s plenty of dish, though the intrepid Salamon never cracks the mystery of Lucy Jane’s paternity. Like many women, Wasserstein had mother and weight issues. Her relationships with men were complicated, to put it mildly: she was unusually close to her billionaire financier brother Bruce (after Lucy Jane’s premature birth, he claimed he was the father to see his sister in the hospital); she discovered she had a half-brother institutionalized as a child; she routinely fell in love with unattainable men, often gay ones. She was a bundle of contradictions—stunningly selfish yet a loyal friend, vulnerable yet calculating. The narrative is packed with pathos and drama, along with insight into incestuous Broadway politics, so it’s unfortunate Salamon tries to shoehorn it all into a trite Peter Pan theatrical trope (Wasserstein was named for the J.M. Barrie character). But she nails one shrewd truth about the playwright who became synonymous with a generation of privileged women: fittingly, Wasserstein’s most expertly crafted creation was herself.