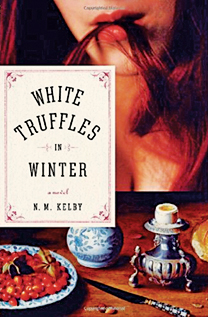 Considering current tastes for all things culinary, it’s a wonder the life of Georges Auguste Escoffier, “king of chefs and chef of kings,” hasn’t been culled more often for historical fiction. Although there are relatively few biographical facts—he revolutionized professional cooking with his brigade de cuisine; he and César Ritz were both fired from the Savoy and went on to establish the Ritz Hotel Development Company; he allegedly had an affair with the actress Sarah Bernhardt—they were the right ingredients for author N.M. Kelby to prepare a tale of intrigue, war and love peppered with appearances of royalty, world leaders, literati and painters set in Paris, London and, of course, kitchens.

Kelby’s story is as much about Escoffier’s wife, the poet Delphine Daffis, confined to a wheelchair in her old age, as Escoffier himself. While her husband works on his fictional last book, The Complete Escoffier: A Memoir in Meals, Delphine hires Sabine, a chain-smoking redhead with a weakness for sailors—and an uncanny resemblance to “the Divine Sarah”—to be the cook at their homestead in Monte Carlo. But Delphine, who harbours resentment for the years Escoffier toiled away at the Ritz in Paris and the Carlton in London, not to mention her embarrassment over the scandal with Bernhardt, has an agenda: she wants Sabine to manipulate Escoffier into granting her immortality, by way of naming a dish after her. And the girl does try, but nothing seems “complicated enough, or passionate enough, or sensible enough,” in Escoffier’s eyes. It’s a hard thesis to swallow: Kelby’s Delphine, cheerless and practical, doesn’t seem to be the sort who’d yearn for something so vainglorious.

Kelby is more convincing when it comes to detailing Escoffier’s passions: his love for Bernhardt and his wife, and also for food, especially during tender moments when the elder chef instructs the stubborn Sabine in the culinary arts. How to ready lobsters for death? Drown them headfirst in a glass of Champagne, preferably Moët. A fine way to go, crustacean or not.

FILED UNDER: White Truffles in Winter