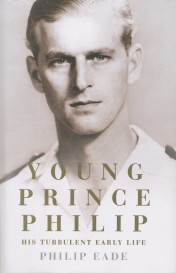 The Queen’s irascible 90-year-old husband may have been born a prince, but, as this new biography shows, he had a childhood so full of trauma and upheaval it’s amazing he emerged a self-contained, self-confident (if brusque) man. Philip of Greece was born in 1921 to Princess Alice of Battenberg, the deaf great-granddaughter of Queen Victoria, and Prince Andrea of Greece, son of George I, a Danish prince elected king of the Hellenes in 1863 by the Greek assembly. His parents were closely related to most of Europe’s then-teetering royal houses. In 1922 the family was exiled after Andrea was blamed for a Greek military disaster and nearly executed. They settled in Paris but, with little money, depended on relatives.

Eade’s exhaustive research shows that while there were holidays spent in the palatial piles of his extended family, all was not well at home. By 1929, his mother was showing signs of mental illness. Diagnosed as a paranoid schizophrenic, she was soon institutionalized, and out of her son’s life for years at a time. During the next 18 months, all four of Philip’s sisters married German princes. (His sister Cecile died in a 1937 plane crash with most of her family.) Andrea decamped to the French Riviera to waste the rest of his life. Apart from vacations with relatives, Philip was alone, packed off to boarding school, including Kurt Hahn’s tough, spartan school in Salem, Germany, which was founded by Philip’s brother-in-law’s family, the Badens. As Germany Nazified, the Jewish headmaster fled to Britain. Philip followed the next year.

While the second half of the book is interesting—it revolves around Philip’s wartime experiences as a Royal Navy officer, his serious romances, including one with Osla Benning, a Canadian-born debutante living in London, as well as his first years as a royal consort—it is Eade’s dissection of Philip’s younger years that makes this a standout royal biography. As for the duke of Edinburgh himself, he’s never been one for self-pity: “I just had to get on with it. You do. One does.”