REVIEWS: Babel No More: The Search for the World's Most Extraordinary Language Learner 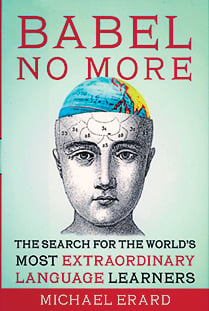 In 1840, a Russian scholar was delighted to stump the Italian Cardinal Giuseppe Mezzofanti, famous in his day for speaking or reading as many as 72 languages, with a few words in a tongue Mezzofanti didn’t know. After the scholar identified it as Ukrainian, the cardinal invited him to return in two weeks, at which time the two men conversed for hours—in Ukrainian. Modern linguistics experts tend to be as dismissive of so-called hyperpolyglots—speakers of dozens of tongues—as Mezzofanti’s few contemporary detractors were. (One, perhaps envious German philologist dismissed the cardinal as a human dictionary who had “nothing to say” in an endless variety of ways.) Linguistics scholars define multilingualism as speaking, thinking and feeling like a native, and do not believe the real thing can exceed three or perhaps four languages.

Erard, a science writer with his own graduate degree in linguistics, thinks that’s far too limiting a definition today. Watching two Hondurans working in a Manhattan noodle restaurant—following orders in Japanese, responding in English and talking between themselves in Spanish—he considers history’s hyperpolyglots possible harbingers of a new Tower of Babel, but one where the locals are still, somehow, managing to communicate. Erard’s engaging account follows his research into Mezzofanti and other multilinguals—a 19th-century Russian girl who had mastered 11 tongues before her death at 17; Ken Hale, the MIT linguist who learned Japanese from watching Shogun with subtitles—as he attempts to learn whether their talent lies inherent in us all, or is a function of a rare sort of brain wiring. And, most intriguingly, whether hyperpolyglotism extracts a cost in some other area of cognitive function.

The neuroscience is remarkable, if still unsettled. The brains of multilinguists may well be more plastic than usual, more child-like in one key respect: the ability to absorb and reproduce foreign sounds the way we all once learned our mother tongues. On the other hand, there is still no magic shortcut: even Cardinal Mezzofanti had a set of handwritten flash cards.

FILED UNDER: Babel No More: The Search for the World's Most Extraordinary Language Learner Michael Erard