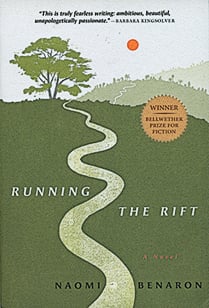 Jean Patrick Nkuba grows up on the shores of the deep and dazzling Lake Kivu in western Rwanda, land of a thousand hills. He is blessed with a loving family, a quick mind and a long, lean body that is built to run. He races his older brother Roger along muddy trails and lush ridgetops, through steeply terraced fields decorated by necklaces of red berries. Once, he chases vandals into the bush after they hurl a rock through his family’s window and call out, “Tutsi snakes!”

It is the early 1990s, and the long-festering rage of Hutu toward Tutsi is about to explode in Rwanda. Thanks to his top marks, Jean Patrick earns one of the scarce scholarships available to Tutsi students for high school. Thanks to his speed, he wins the favour of an ambitious coach, who offers to secure him a spot at university where he can continue to train, as well as a new identification card, making him one of “the chosen.” Jean Patrick is conflicted; his uncle, who raised him, has always insisted he be proud of his heritage, and Roger has joined the RPF, a band of Tutsi rebels being blamed for the country’s unrest. But both men urge Jean Patrick to take the new card, less because it might allow him to compete in the Olympics and more because they know, much better than Jean Patrick, that it might keep him safe.

Of course, no one in Rwanda was safe in the end—those who didn’t kill were hunted. Running the Rift, winner of Barbara Kingsolver’s Bellwether Prize, recreates the insidious hiss of RTLM, the government-sponsored radio station that broadcast throughout the slaughter. Hutu, we ask that you do patrols. Remember how to use your usual tools. We will tell you the names of the traitors. We will tell you how to find them. The book manages to shed some light on how so many came to be gripped by hatred. And it reveals that when madness runs so rampant, there is only one way to survive: through the courage and kindness of others.