REVIEWS: Sealab: America's Forgotten Quest to Live and Work on the Ocean Floor 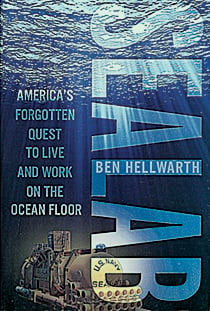 Call it The Wet Stuff. Sealab is the story of a small group of adventurous U.S. Navy scientists and divers attempting to prove man could live and work deep underwater. It was dangerous, path-breaking business that pushed far into Earth’s watery frontiers. Unfortunately, most people had other things on their mind at the time.

Beginning in the 1950s under the tutelage of Capt. George Bond, the Sealab project grew out of navy efforts to rescue crews of damaged submarines. Bond pioneered the concept of “saturation diving,” in which divers would live and work at great depths for long periods of time, instead of surfacing after just a few hours. This allowed for the possibility of elaborate sub rescue missions and also opened up the entire ocean floor for exploration and exploitation.Yet Bond’s functional vision faced stiff competition. His chief rivals were French celebrity diver Jacques Cousteau, and the U.S. space race.

Bond placed his early Sealab habitats several hundred feet below the ocean’s surface and focused on gathering data on human physiology under pressure. It was boring but necessary scientific work. Cousteau, on the other hand, situated his “Starfish House” just 35 feet down—at that depth there were few complications or dangers. And the light was better for making movies. Cousteau’s divers cavorted in a flying-saucer-shaped mini-sub, smoked cigars and enjoyed the company of a parrot named Claude. Cousteau won an Oscar for best documentary in 1964 and became a household name. Sealab languished in obscurity.

The final blow to Bond’s plans came in 1969 with the death of a diver during the inauguration of Sealab III. While the space program was far deadlier than Sealab, without NASA’s broad public interest and massive government commitment, this single fatality proved the end of Sealab. The private sector eventually developed the means to work underwater without the need for elaborate habitats or flying saucer mini-subs. And Cousteau moved on to greater fame as a conservationist. Bond and his Sealab aquanauts, however, remain the real pioneers of life underwater.