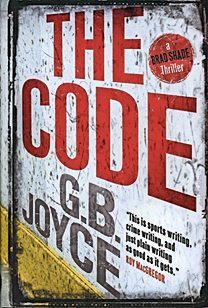 Brad Shade is a broken-down hockey player, retired and clinging to his job as a big-league scout. He lives in the game’s penumbra—a familiar but not-always-welcome presence among the former stars with whom he played. He has tried his hand at private investigation. But the work depressed him and he has gladly taken the lifeline lowered by a former teammate, now a pro manager. Then, while at a charity alumni game in Peterborough, Ont., Shade stumbles across a double murder involving the family of a junior player he’s supposed to be bird-dogging. With his skills as a sleuth, and grasp of hockey’s dark side, he’s uniquely equipped to solve the crime.

Gare Joyce’s first venture into fiction is no genre-smasher; the play on “Sam Spade” was our first clue. But hockey’s inherently gothic and operatic qualities make an ideal backdrop for murder, and Joyce, a veteran sportswriter, exploits them with verve. At the professional level, Shade tells us, the sport is “a systemic organization of hatreds” that should be listed on every player’s hockey card, “right below the height, weight, position and hometown.” When he finds a legendary junior coach and a team doctor bludgeoned to death, Shade knows those lines of hatred will lead to the killer. The trick is to discern them.

The snap-together parts of a whodunit are here. Money-grubbing villains. Venal women. A jaded antihero irresistibly drawn to the mystery. Joyce brings them to life with cantering prose, and sly characterization that illuminates hockey’s capacity to bring out the worst in people. A cover tag on The Code bills it as “a Brad Shade thriller,” suggesting our protaganist will be back for more. Here’s hoping his next shift is as entertaining as his first.

FILED UNDER: gare joyce the code