REVIEW: Rin Tin Tin: The Life and the Legend 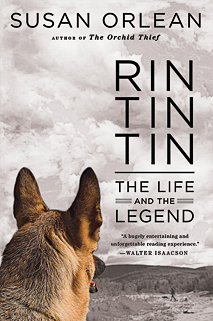 New Yorker writer Orlean has pulled off a small miracle in her first book since The Orchid Thief. She turns the story of the most famous movie dog in history, Rin Tin Tin (although, like the Dalai Lama, there are many iterations of the original Rinty), into a book that wanders off-leash in all sorts of rewarding ways. She explores the role of dogs in war (Germany had 16,000 in military service); the evolution of Hollywood heroes; the nature of our attachment to our pets; and the American faith in the qualities Orlean believes Rin Tin Tin embodied—“strength, loyalty, devotion and truth.”

Sometimes Orlean tries to balance too many ideas on Rin Tin Tin’s shapely nose. But just as his trainer, Lee Duncan, devoted himself to the German shepherd puppy he rescued from a bombed-out kennel on a battlefield in France, Orlean stubbornly, daringly, puts her faith in the dog’s ability to stir modern readers. Fortunately, she hit research gold when she came across Duncan’s papers, including his memoirs, in a neglected storage unit. A fatherless child who spent years in an orphanage, Duncan wrote that the dog “crept right into a lonesome place in my life and had become a part of me.”

The star-making of Rin Tin Tin took over Duncan’s life (even his daughter was jealous). By 1927, the dog was named the most popular performer in the U.S., and his films were seen in 70 countries around the world. In 1954, having survived the shift from silent films to talkies and finally television, The Adventures of Rin Tin Tin was second only to the Walt Disney show in ratings. Rin Tin Tin received 10,000 fan letters a week, out-drawing the more bucolic (and fluffier) Lassie.

Orlean spent almost 10 years researching and writing the book, visiting dog cemeteries in Paris and poring over the detritus of Duncan’s sad, admirable life. It’s the sort of authorial feat—like Rin Tin Tin’s famous 12-foot leaps over walls—that only a writer passionately devoted to her subject could achieve.

FILED UNDER: Rin Tin Tin: The Life and the Legend Susan Orlean