NOW: (Winnipeg) Here in Manitoba, the Trans-Canada Highway is ranked No. 7 on the local CAA’s list of worst roads. It was voted there by CAA members, thanks to ongoing construction and poor road quality.

I have yet to drive west of here, but the road was pretty good east of Winnipeg. And Manitoba’s minister of transport says he’s committed to making it competitive with the U.S. interstate system, which is often the preferred route for commerce from Manitoba to Ontario.

“A number of years ago, it was the Trans-Canada in name only – it was a series of provincial highways with little federal support,” says Steve Ashton. “But we’ve been making a significant investment in Manitoba and we’ve had some extra support from the feds … we’re bringing it up to the standard of interstates in the United States.”

The Manitoba border crossing at Emerson, south of Winnipeg, into North Dakota is the busiest crossing west of Windsor, handling more traffic even than the crossing south of Vancouver. This is because trucking in the States is generally easier and cheaper than in Canada, and especially compared to the single lane highway of north-western Ontario.

“You get to the border and you really notice the difference,” says Winnipeg city councillor Jeff Browaty. “They have all the money for it in the States – there are overpasses where we would have traffic lights and intersections. The speed limit is 75 mph, and gas is so much cheaper.” 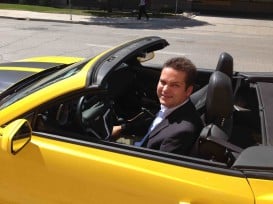 But both politicians agree the Trans-Canada is an icon – it’s still a highway that’s earned its national pride. Browaty sat in the Camaro and said he’d love to take the drive across the country, to cross it off his bucket list.

Ashton’s already done the drive. As a family of new immigrants from the U.K in 1967, his mom and dad loaded their three sons into the back of a ’64 Buick LeSabre the following year and drove west from Manitoba to Victoria; the next year, they drove east to Toronto.

“I’ll never forget it,” says Ashton, who was 12 years old for the first trip. “There were lots of motels, lots of Mountain Dew and hamburgers. I’ve been to many places around the world since, but those were still some of the most memorable trips I’ve ever taken. I would still list the trip as absolutely iconic.”

THEN: (Winnipeg) I was poking through the archives of the Manitoba CAA and found a newspaper story about a Mr. H.W. White, who won a gold trophy offered by the Vancouver Automobile Club for being the first motorist to drive from Vancouver to Winnipeg under his own power. I’d never heard of H.W. White, and the clipping was not dated, but it was in a scrapbook of items from around the time of the First World War.

H.W. White and his Cadillac

The story told of how White, accompanied by his unnamed wife and daughter, drove a Cadillac down to Seattle then across Washington state before crossing back into Canada from Idaho at Kingsgate. There had been a lot of flooding, and at one point the road followed a trestle bridge over Lake Pen for 4 kilometres where “water was lapping over the planks of the bridge for nearly the whole distance.” Once in Canada, the roads deteriorated and, thanks to a couple of washed-out bridges, the party had to drive on railway tracks for three kilometres with “a solid rock wall of 50 feet high and on the other side a drop of 175 feet.”

They made it to Winnipeg at an average of 25 km/h, and I thought I had a reasonable image of the drive until I read the final paragraph of the lengthy newspaper account. “In addition to the Cadillac car, the party had a Warner trailer truck, or a regular house on wheels, a complete camping outfit, containing 2 bedrooms with full sized beds, springs and mattresses, a dining room and kitchen.” Presumably, this was another venture with an unnamed chauffeur, and maybe more staff, tagging along behind. I’ll be trying to find out more about the Whites when I reach Vancouver.

SOMETHING DIFFERENT … (Winnipeg) My friend Willy Williamson has a thing for cars, and pride of place right now in his garage goes to the Chickenmobile. 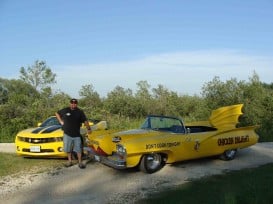 It’s a 1959 Ford Thunderbird that he found rotting beside the road a few years ago. It used to be a parade car for the Chicken Delight chain of restaurants, but it spent many years in a barn after the owner tried to destroy it – the tow-truck driver commissioned to take it to the wreckers kept it instead.

Willy and some friends restored it because it seemed the right thing to do, but he isn’t quite sure what to do with it now. We took it on a beer run into town and, of course, it attracted all kinds of honked horns and waves – you just can’t ignore this car.

I suggested we swap cars, so that Tristan and I would drive the Chickenmobile for the rest of the way to the end of the Trans-Canada Highway, and Willy figured it would make it to Victoria and was happy to keep the Camaro, but there’s no roof and practicality won the day. Besides, I’m not sure what General Motors would say about getting a Chickenmobile returned to them at the end of this journey. 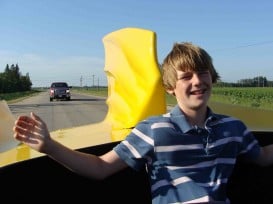 SOMETHING FROM TRISTAN, 12: (Winnipeg) Today I got informed of a great skateboard shop in downtown Winnipeg called Kings. Apparently it was an old movie theatre that was renovated to be a skateboard shop.

I bought some new bearings called Bones Precision Swiss bearings and they were about $75 without tax. Hopefully I’ll get wheels soon and my board will be complete.