Rob Ford roundup: Party on the Danforth and 'a new character' emerges

How Toronto's mayor spent his weekend 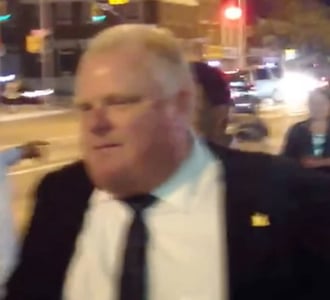 A screenshot of Mayor Rob Ford from a Youtube video posted over the weekend.

A record-setting 1.5 million people attended Taste of the Danforth in Toronto over the weekend and Mayor Rob Ford was one of them. The mayor made an unscheduled appearance at the giant Greek street festival, where meat on a stick, music and beer play important roles.

News of Ford’s appearance on Friday night soon generated social-media buzz, as the mayor — who appeared to be unaccompanied by any staff or security — wandered the streets with a Tim Hortons coffee cup in his hand and posed for pictures with citizens. Videos show him slurring his words, repeating the phrase “I’m not driving” and saying he wants “to go up to the party.” A witness told the Toronto Star that she saw Ford standing next to his black Escalade near Danforth Ave. around 9:45 p.m. on Friday night.

And: “I had a good time. I think things are getting blown out of proportion.”

He also apologized if he had offended anyone, which he says he probably didn’t.

Ford’s Friday-night appearance wasn’t sitting well with some councillors Monday morning, with Counc. Jaye Robinson telling CBC radio host Matt Galloway that the mayor should take a leave of absence to deal with his issues. “If he wants to be the mayor of this great city, I think he needs to take a leave of absence and get help,” Robinson said, adding that his conduct was a “continual distraction.”

Robinson first raised the issue of the mayor taking a break in June. She was booted from the mayor’s executive committee soon after.

Also in the Ford universe, The Globe and Mail has a new report Monday that introduces what it calls “a new character” into the alleged crack-video affair. This “new character” is Bruno Bellissimo, a man who Ford tried to visit while Bellissimo was an inmate at the Toronto West Detention Centre in March. The strange thing about the attempted visit — which the Globe confirmed with multiple sources, including Bellissimo’s mother — was that Ford tried to do it at 7 p.m. Visiting hours at the Toronto West Detention Centre end at 4 p.m. The report says the mayor first requested a tour of the facility, before asking to see the specific inmate. According to the report, both requests were denied.

The Globe says that Bellissimo is known to be involved in drugs and was in jail in March on assault charges against his parents. It is unknown whether Bellissimo has a connection to the house where Fabio Basso lives — that would be the one outside which Ford was photographed with three young men, one who is dead and two who are alleged to be members of the Dixon City Bloods gang. Both Basso and Bellissimo attended Don Bosco Secondary School in the ’80s alongside Ford, the Globe reports.

So, to recap: the Toronto mayor tried to make an after-hours visit to a Toronto jail to meet an inmate in March and, on Friday, he “had a few beers” and went to one of the busiest Toronto street festivals of the year. As of 11 a.m. Monday there was no sign of the mayor at city hall and no word from Ford or his staff.