Next Issue Canada to launch Oct. 15 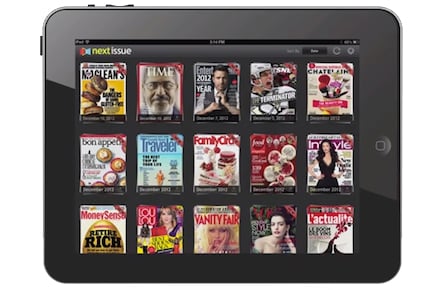 It’s $9.99 a month for access to monthly magazines, and an additional $5 a month to also get weekly magazines. The service will be available starting Oct. 15 to Rogers wireless and cable customers, who will get a two-month free trial. On Dec. 15, Next Issue Canada will become available to all Canadians with the first month free.

A French version of the tablet app will not be available until next year.

Next Issue Canada will be competing with a similar free alternative offered by many libraries in cities across Canada —including Edmonton, Ottawa, Regina, Saskatoon, Toronto, Vancouver and in Quebec — that is run by the digital magazine company Zinio.