In the hours before Hurricane Sandy makes landfall, both President Barack Obama and Republican presidential candidate Mitt Romney have altered their campaign plans, and comments Romney made about disaster relief in 2011 are back in the news.

The Atlantic is drawing attention to Romney’s remarks during a Republican presidential primary debate, where he suggested that the federal government should hand services covered by the Federal Emergency Management Agency over to individual states, or even privatize the services provided by the agency.

“Every time you have an occasion to take something from the federal government and send it back to the states, that’s the right direction,” Romney told CNN’s John King during the presidential primary debate on June 13, 2011.

In Virginia, the Romney campaign team got some favourable press when it donated one of its Romney-Ryan campaign buses to offer disaster relief during the storm.

“Bring donations to VA Victory offices. Romney bus will deliver them to those affected by #Sandy,” said Virginia communications director Curt Cashour on Twitter. He also tweeted this photo: 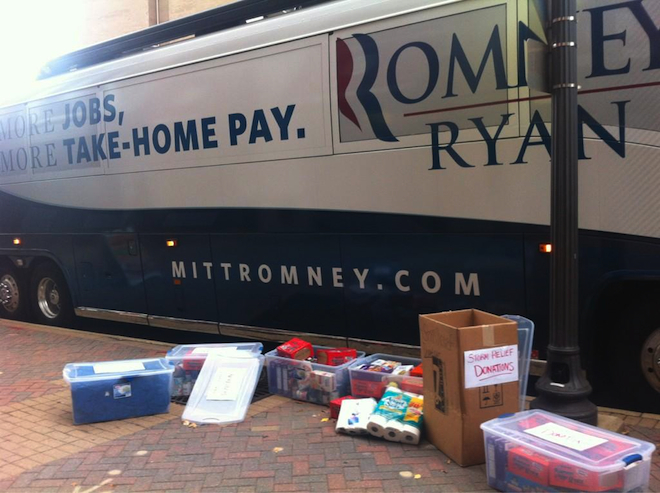 Meanwhile, both Obama and Romney have suspended email fundraising campaigns to the states affected by the storm, reports the Washington Post.

Obama has also cancelled planned visits to Florida, Virginia and Ohio, where he was to appear with Bill Clinton. Instead, Obama will go back to the White House where he can better monitor the storm, said a statement released by the president’s press secretary.

The president arrived at Andrews Air Force Base Monday morning. 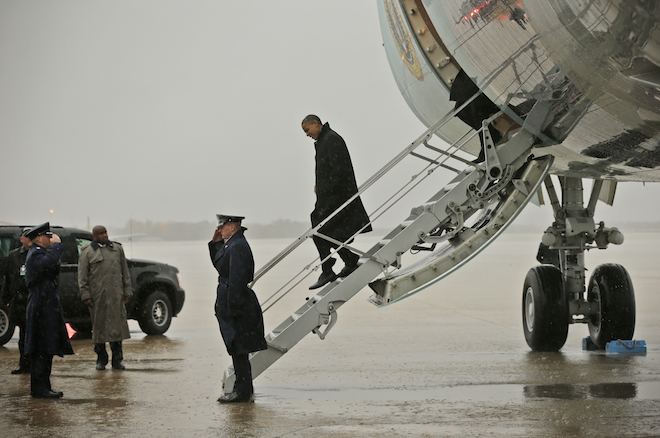 President Barack Obama steps off Air Force One upon his arrival at Andrews Air Force Base, Md. on Oct. 29, 2012. (Pablo Martinez Monsivais/AP)

While all these campaign changes might seem like an overreaction at first, consider this Wall Street Journal image of Sandy next to an image of Hurricane Irene, which was responsible for more than $15-billion in damage in 2011. As the photo shows, Sandy is both wider and stronger than Hurricane Irene and this Category 1 hurricane is expected to bring some of the worst flooding seen in 70 years, said Connecticut Gov. Dannel Malloy.