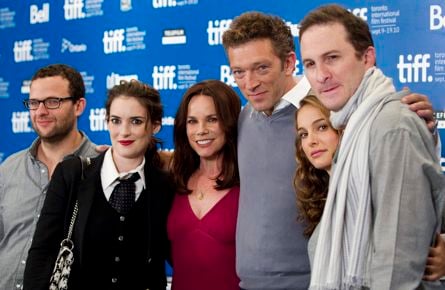 On Sunday, I was slated to cover a slew of parties, but I got news that afternoon that my grandpa was in critical condition at the hospital. I arrived in Ottawa that evening and spent a few hours hanging out by his bed. He passed just hours later in the early morning. By the Monday evening, I was back in Toronto to cover the Black Swan red carpet. It was a daunting task, but on with the show.

The screening was held at Roy Thompson Hall, the same theatre where The Town red carpet took place. But the mood was much more subdued for Black Swan than for The Town. Maybe fatigue had finally set in among the media. It was also policed with more intensity, with publicists coming by to request that we move our toes back behind the black tape barrier.

At The Town premiere, it seemed like 10 SUVs had come up with talent and a hundred people walked the carpet. But at Black Swan, the celebrities were few and far between and didn’t talk to the press. The first to arrive was Winona Ryder, who as far as I know, didn’t talk with anyone. She walked by me and my colleague Tom hurriedly, looking frazzled. Tom remarked that “she looked crazy.” Crazy may be a bit extreme, but she certainly didn’t seem comfortable. You’d think people would be able to bluff composure on the red carpet after so many years in the business.

Next up was director Darren Aronofsky, who was cool as a cucumber on the red carpet, followed by Vincent Cassel. Now, up until this point I had been primarily concerned with how much my feet hurt because I had worn the wrong shoes. But Cassel made the pain disappear. It’s not that he’s good looking—a good looking actor is as rare as a blue sky. Rather, it’s that his face is striking. In a peculiar way, he reminds me of a lobster. It must be the massive eyes.

I was truly entertained when Tom interviewed him. Boy is Cassel sassy. When Tom asked about sexuality in ballet, Cassel said the sexiness had to do with the tights. What a crock. But I found it hilarious—finally, someone with a sense of humor on the red carpet.

Up next was Ksenia Solo who was articulate, but had a tragic dress on. Tom remarked that it looked Tim Burton-esque. I’d call it Lolita-goth. Toronto Life wrote that it looked like it had been purchased “at a Pussycat Dolls yard sale.” We were then supposed to interview Natalie Portman, but halfway down the red carpet, she abandoned the media to spend time with fans. I thought this was quite charming, however other media outlets weren’t as impressed and started whining. When she did walk by, I was wowed by the volume of her hair—that must have taken a while to do—and the flawlessness of her makeup. Though she’s obviously gorgeous, on the red carpet she was less of a person than an expertly made-up and dressed-up doll to be displayed and consumed.

Thinking it best not to dwell on this—I’ve been cautioned by my editor to steer clear of cynical commentary—I decided to check out the Festival Music House, where the Canadian record label Arts and Crafts was hosting the first night of a three-day music festival showcasing Canadian artists. I arrived just in time to catch Coeur De Pirate (aka Béatrice Martin), who was lovely. With her pretty blonde hair and tiny frame, she reminded me of Michelle Williams.

The crowd was a typical Toronto one, though, standing one metre from the stage with their arms crossed. (Apparently, Chilly Gonzales, the earlier performer, had chastised them for it.) The energy level finally picked up when Basia Bulat took the stage. And what do you know? Bulat also reminded me of Michelle Williams. Between Coeur De Pirate, Bulat, Williams and Carey Mulligan, TIFF has been overrun by remarkably similar-looking cute, blonde, talented women. Scary, I know.

Bulat put on a great show at the industry-only party. I was standing behind Bruce McDonald, the director of Trigger, who was loving it as well. Next up were Stars who put on an equally engaging performance, though I was overcome with a wave of exhaustion and had to duck out before their set was done.