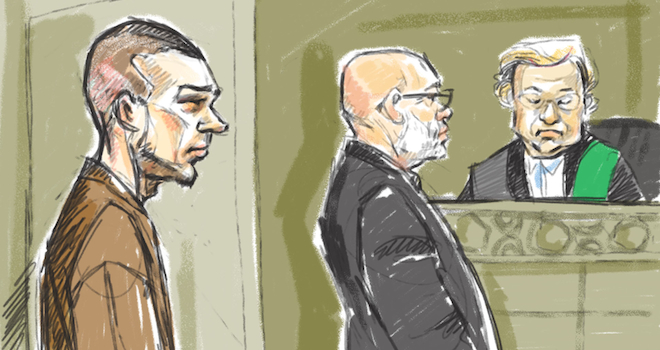 Mark Smich is seen with his lawyer during his court appearance, Thursday. (Courtroom sketch by Marianne Boucher/CITYNEWS)

HAMILTON – A second suspect has been charged with first-degree murder in the death of Tim Bosma, a Hamilton father who took two men on a test drive and never returned.

Lawyer Tom Dungey says Smich will plead not guilty, adding, “We will be defending this case vigorously.”

Smich’s next court appearance was set for June 13, the same day the other suspect in the case is to appear.

Dellen Millard, 27, is charged with first-degree murder as well as forcible confinement and theft of a vehicle. His lawyer has said his client will also plead not guilty.

Police allege the suspects are the two men Bosma took for a test drive in the pickup truck he was trying to sell online.

Police are still looking for at least one other person, as a dark blue GMC Yukon belonging to Millard was seen on video following Bosma’s truck as he left his home on the test drive. Police have urged that person to contact investigators.

Bosma’s remains were found about a week after he disappeared, burned beyond recognition at a farm belonging to Millard.

Police believe he was killed the same night he went missing, though they haven’t yet said if he was killed in the truck, on the farm where his remains were found, or elsewhere.