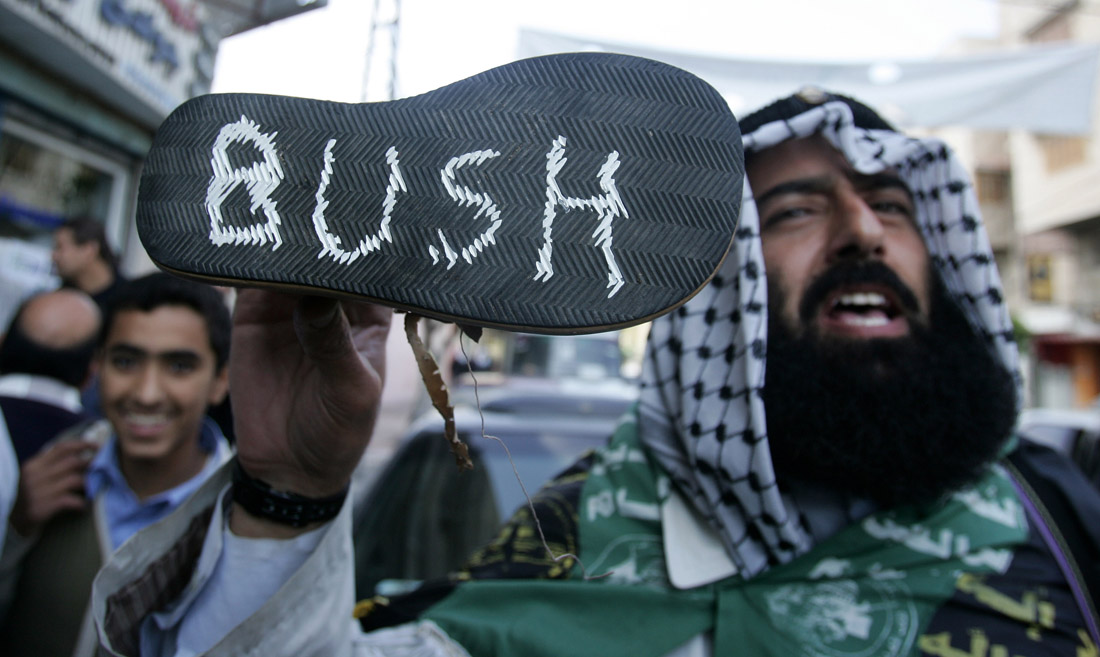 By now you’ve heard about how, during George Bush’s recent visit to Baghdad an Iraqi journalist named Muntader al-Zaidi winged his shoes at the US President, yelling “This is a gift from the Iraqis; this is the farewell kiss, you dog!”. Maybe you’ve seen the video. And maybe you heard about how Mr. al-Zaidi is now a folk hero across the muslim world.

But did you know that in Iraq, throwing a shoe at someone is not just rude and possibly dangerous, but the supreme insult? Apparently hitting someone with a shoe means that the target is even lower than the shoe, which is always on the ground and dirty. At least that’s what the NYTimes told me, as did just about every other story I read about the incident.

Now look. I don’t know what the “supreme insult” is here in Canada — (maybe giving the goalie a snow-job?) — but I’m pretty sure launching your shoes at someone is an insult. I don’t know what it means, exactly, to hit someone with a shoe, but it is gross, maybe painful, and definitely not flattering.

But the whole thing has got me wondering. Despite his show of bravado and jocularity, I’m pretty sure Bush wasn’t too pleased about the incident, and I’ll be he was a bit insulted (wouldn’t you be?). But it does raise an important question:

Was he insulted enough?

Was Bush insulted to the degree that his insultor intended him to be insulted? How would we even know? It’s a bit like the philosophical saw about trees falling in forests, as in, if someone insults the US president and he doesn’t realize he is being insulted, has he actually been insulted?

But there is a strain of research in the philosophy of language, descended from the pioneering work of Paul Grice, that starts with the notion that the point of communication is to deliberately effect another person’s psychological states. And as Grice realized, the way we do this is by getting our audience to realize that that is our intention. That is, an intentional act of communication includes, as part of its content, that the target audience recognize and understand just what it is the communicator is trying to do.

So, a quasi-Gricean analysis of what the shoe-chucker was doing was this: Mr. Zaidi threw his shoe and called Bush a dog intending

But what if (2) fails? What if Bush just thought that Zaidi wanted to hurt him, and not insult him? What if Bush was only mildly insulted? That is, what if Bush didn’t quite get just how insulted he was supposed to be — has the insult then succeeded?

I say no. I say that while Mr. Zaidi threw his shoes at Bush intending Bush to be very insulted, Bush was nowhere near as insulted as he was supposed (intended) to be. Why is this?

Because recognizing someone’s communicative intentions is highly contextual, shot through with cultural clues and background assumptions about what is insulting and what is not. (Related: A Quebec judge recently ruled that someone who told someone else to fuck off did not actually curse at them, because in Quebec, curses are literally curses — e.g. Tabernac, calisse, etc., unlike in France, say, where they say merde.)

This is important. There was a great deal of palaver, post-9/11, about the dangers of a “clash of civilizations”. I always thought that sort of talk was over-stated. Except what the shoe-incident underscores is just how deep the diplomatic chasm is between us (well, the US) and them. Bush was over there to give a speech highlighting the newly adopted security agreement between the United States and Iraq. That is, 1) he was going to say things, intending that the Iraqis come to believe these things, about security, the US, and Iraq. And 2) the Iraqis needed to understand that them coming to believe these things was Bush’s intention. And 3) that understanding that intention was part of why they should come to believe these things.

I doubt Bush succeeded, for the same reason that I doubt he was very insulted. It’s #2 that is the problem: communication is like sex – it only works if the recipient understands just what it is you are trying to do.

I see the shoe incident, then, as an unhappy symbol of why things have gone so badly for so long in the middle east, and why diplomacy in general is so hard. If we can’t even insult one another for god’s sake, how are we ever going to manage the more serious stuff?