Should the Habs retire Roy's number? 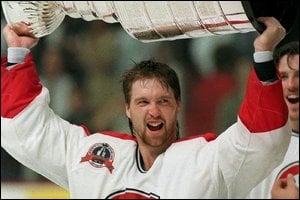 La Presse reports this morning that the Canadiens will retire No. 33 this year as part of their 100th anniversary celebrations. It’s not yet confirmed, but if it’s true, the move will stir controversy. No less a figure than Red Fisher, the legendary Gazette hockey writer, has advised against the move. Roy turned his back on the franchise forever, according to Fisher, that night in 1995 when he stormed across the bench and declared that he had played his last game as a Hab. Others point to Roy’s questionable conduct as a junior coach—scrapping with fans in Chicoutimi; dispatching his kid to lay a sh**-knocking on another goalie during a game. These incidents, they argue, make Roy an unsuitable candidate to occupy the Bell Centre rafters alongside the likes of Jean Beliveau and Maurice Richard.

No question about it, St. Patrick will never be mistaken for Citizen of the Year. And yet…

You simply can’t discuss Roy’s departure from Montreal without noting the chief mitigating circumstance: he was hung out to dry that night by Mario Tremblay, a bad coach who left him in for nine goals against the Detroit Red Wings. And if good behaviour is suddenly a criteria for jersey retirement, we’re about to enter a drought in heart-warming celebrations. These are pro athletes, after all.

In the end, I think retiring the jersey is the right choice. Roy’s positive impact on the storied franchise far outweighs the negative. He counts among the greatest goalies to play the game, and effectively reinvented the position. He brought the Canadiens two unlikely Stanley Cups. Fully 288 of his 551 wins came with Montreal. He won three Vezinas (all with the Habs) and a record three Conn Smythes (two with Montreal). Hoist the number, and get it over with, I say. If Roy goes to jail someday, we can have a debate about pulling it down.

Still with the Habs, winger Alex Kovalev wins the award for staying bland in adverse circumstances in this interview. Fast forward to about 3:50, as Kovy’s buddy nods earnestly in assent to the player’s clichés … Alex should take him wherever he goes