Showdown: JFK and the integration of the Redskins

A book by Thomas G. Smith 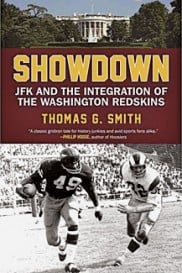 Who would have imagined that a team named the Redskins would have a race problem? George Marshall, owner of the Washington football team, was one of the best showmen in football and one of the most unreconstructed racists: in 1961, the Redskins were the only NFL team without a black player on the roster. Smith tells the story of how Marshall was forced to change his ways under political pressure. Stewart Udall, president Kennedy’s secretary of the interior, realized that since his department owned the land beneath Marshall’s new stadium, he could effectively order the team to hire black players under threat of losing its lease.

Udall’s decision to take on Marshall, Smith explains, took on importance beyond one city and one team, and became “a sort of philosophical football” for the U.S., with liberals rooting for Udall’s move as a symbol of desegregation, and conservatives seeing it as “an unwarranted intrusion by big government.” Finally, Marshall had to buckle under government and public pressure, and black players like future hall of famer Bobby Mitchell arrived to turn the franchise around.

The book is more of a potted history than an in-depth study of Udall’s attempt to integrate the Redskins: Smith spends several chapters setting out the story of the Redskins and sports segregation, while Udall’s decision to challenge Marshall is covered in only about a page. But Smith does manage to show how the Redskins battle presaged civil rights battles to come, and the incident demonstrates why, in spite of JFK’s weaknesses in civil rights, his administration “took positive steps to combat racial injustice.” Above all, it gives us a strong portrait of Marshall, a man near the end of his life, still committed to segregation even though it was costing his team wins. If we thought that business owners always acted in their own best interests, Marshall (who said “does it matter which team has the Negroes?”) reminds us that for some, ideology is more important than winning.