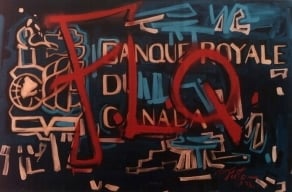 After the National Battlefields Commission cancelled the re-enactment of the  Plains of Abraham battle, several “members of Quebec’s artistic community” (read: sovereignists) decided to commemorate Quebec through the ages by getting a bunch of their friends and colleagues to read a variety of texts, songs, passages, etc. from the annals of its history. The result: Le Moulin à Paroles–literally, “windmill of words”, but also a term meaning “windbag”. A bunch of other people, sovereignist and federalist alike, were asked to attend. OK so far. Then it was announced that the FLQ manifesto would be read and all hell broke loose. One provincial Liberal minister said he was dropping out. Ditto Quebec’s mayor. The sovereignists and federalists cried censorship and propaganda, respectively.  All in all, a very plain, paint-by-numbers, made-in-Quebec mini-psychodrama that helps pass the time.

The sovereignist talking point throughout the whole debacle has been this: the FLQ manifesto is part of our history, and to exclude it would amount to censoring a crucial time in the province’s history. “It’s like if the Americans refused to speak of slavery, if the Germans refused to speak of the Nazis or if France didn’t speak of the resistance,” said Luck Mervil, the Quebec entertainer who will read the manifesto, to Le Journal de Montréal yesterday.

It’s an interesting analogy, however flawed. It suggests he is reading it to remember, not glorify, the terror the FLQ inflicted on Quebec 39 years ago. Logically, then, you’d also want to hear about the direct victims of this terror–that is to say, Pierre Laporte, James Cross (whom the FLQ kidnapped, but who is still very much alive) and the handful of people who died as a result of the FLQ’s many bombing campaigns.

It’s why Dominic Maurais, a radio host at Quebec’s Radio X, humbly suggested to festival organizer Brigitte Haentjens that he, or someone else of her choosing, be allowed to read a letter written to Robert Bourassa from Pierre Laporte shortly before the FLQ abducted and murdered Laporte, as well as a list of people murdered in during the FLQ’s reign. (My colleague John Geddes makes a similar case here.)

We thank you for your suggestion. But the Moulin à Paroles is not meant to be an objective history book. The texts are chosen for their pertinence, and given this we must do the same for all of Quebec’s major events (for example, the loss at the Plains of Abraham is a victory for others, as you know!)