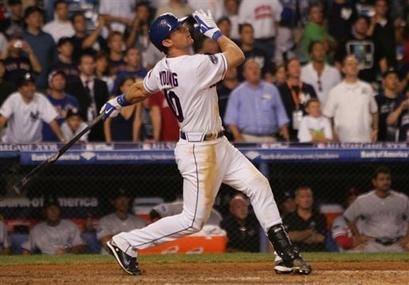 La première étoile: All my wife ever does is lounge around on our four-poster saying, “Why can’t you be a real man, like Josh Hamilton?” Okay, I get it. It’s a great story. He’s a great hitter. But what about the guy who actually won Tater-fest? Justin Morneau bats .323, he has 68 RBIs, he was the winning run in last night’s All-Star marathon and he survived New Westminster, B.C., which in its hey-day was worse than injuries or addiction. A little respect, please.

Two minutes for … leaving a paper trail. Guess that shipment of HGH was for your wife, eh Rog?

Who’s got tickets? There’s absolutely nothing on. Oh awright, the stupid Tour de EPO is still on. But buck up, little ones. Tomorrow night, our Hamilton Ticats rumble into the City of Cows to tear apart the Red Horse.

Fun police: I like baseball as much as the next guy, but hands up everyone who was watching at 1:40 a.m. when Morneau plodded across home plate for the winning run, his eyes propped open with toothpicks.

Extra bases: now we know why they call him “Rampage” … the Mop and Pail catches onto the Boots Del Biaggio scandal that had Balls outraged a month ago … Stephon Marbury may be done in New York … not sure why I’m posting this, but here’s a pissed Aussie with his “Adelaide bird” Catherine, live-casting the Calgary Stampede chuckwagon races. It just works on so many levels…