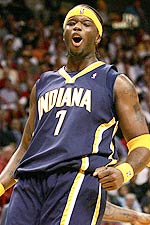 La première étoile: Brian Colangelo. By sending T.J. Ford, Rasho Nesterovic and the Raps first round draft pick to Indiana for Jermaine O’Neal, Toronto has finally acquired a legitimate centre who can absolutely dominate a game. O’Neal is entering the prime of his career and, if he can stay healthy, this trade will most definitely take the Raps to the next level. Let’s hope this ends up better than when Hakeem Olajuwon joined the Raps at the age of 37 and pretty much became nothing more than a cheerleader

Two minutes for … Not knowing when to give up. Jeremy Roenick should head up to the press box instead of signing a contract extension with San Jose. He’ll be 39 next January and is only sticking around to have one last shot at winning a Stanley Cup. Problem is, he kind of sucks now. In each of the past three seasons he hasn’t recorded more than 33 points in an entire campaign and is a woeful -31.

Who’s got tickets? Today’s semi-final game between Spain and Russia. Both teams love to go on the attack and have already made huge impressions at this year’s tournament. They also have a history of completely imploding and falling short of the prize. Who is going to prevail? My gut tells me the Russians are just too fast to be stopped.

Fun police: Just please get this Mats Sundin thing over with. I have a crying booth set up in my basement to deal with his departure, complete with a box of Kleenex, a 60 oz. jug of Jack Daniels and an old Rick Vaive jersey to catch my tears. Oh, one other thing. When Mats finally does go, who the hell is going to be the Leafs first-line centre? Matt Stajan? Yikes.

Extra bases: There’s a very easy way of solving this mysterious war of words that has arisen between the Cincinnati Reds’ Adam Dunn and Blue Jays GM J.P. Ricciardi. All J.P. has to do is check the number of the person who called him and phone it to figure out who placed the call. The fact that he has hesitated to do so is a little weird.