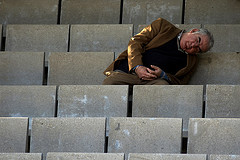 La première étoile: The Continental Hockey League, or the Russian Super League, or whatever it’s called. Who cares. It’s performing a vital public service by taking on every thug, reject and washed-up problem child the NHL casts off and paying him way too much tax-free money to lace up—with all due apologies to Yammy Jagr. The latest are Ray Emery and Chris Simon. Does anyone know the whereabouts of Theo Fleury?

Two minutes for … tardiness. To the state of Kentucky. Having stopped it’s ears and closed its eyes for years to the misuse of steroids on racehorses, the state has just now formed a commission with the power to ban the stuff. Sorry, to vote on banning the stuff. No rush or anything.

Who’s got tickets? Tour de France, Stage 5, on OLN. Just in case you have nothing to do at 8:30 a.m., and wonder who’s on the cutting edge of medical science.

Fun police: TSN plans to provide 220 hours of curling coverage this season, which is billed as the “Season of Champions.” I guess Monza car racing in small-town Quebec was too exciting.

Extra bases: Rumours of Damon Allen’s Lazarus-like return to the CFL were greatly exaggerated…we at Balls like the Hamilton Tiger Cats—no really, we do—and we hereby declare the Tabbies the Official CFL Team of Balls in 2008 (screw you Cohon, we ain’t paying no licensing fees) … hey, forget the Rays, how about them Twins?