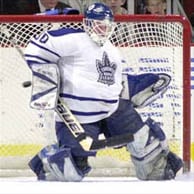 La première étoile: Marcus Thames. The Detroit Tigers slugger hit a monster, ninth-inning homerun against the San Francisco Giants last night-his fifth consecutive game with a dinger. Not impressed? Try this: his last eight hits have all landed on the other side of the fence. Thames is so hot these days that a bunt attempt would probably clear the wall. And in case you haven’t noticed, folks, his once-foundering team is riding his hot bat up the A.L. Central standings. The underachieving Tigers have won seven of eight, and now sit just 6.5 back with plenty more to play.

Two minutes for … poor judgment. To me, for allowing Frisco to write the previous item. “A bunt attempt would probably clear the wall”?? Jesus, Mike. The Tigers PR department just called, and even they’re embarrassed. Honourable mention to all those who attacked my post on Glenn Healy. Your problem is that Heals speaks the truth. And you can’t handle the truth (let me try that again … ahem … ) YOU CAN’T HANDLE THE TRUTH!!

Who’s got tickets? Lemme see, I’m just going over the agate page of my morning paper, and there doesn’t seem to be … oh look! Sweden and Russia are going to have it out over who the real Group D underdog is at Euro2008! Play starts at 2 bells ET, on Sportsnet. Screw work. This is critical!

Fun police: No more wanking over Tiger Woods folks. He’s bunching it up for the year, according to breaking news on the Golf Channel (there’s a phrase you don’t see often). Seems TiWo needs season-ending surgery, a concept normally associated with Peter Forsberg. He’s gotta stop going into the corners with players named Rocco.

Extra bases: I think the Leafs should serve this beer, as they too are a “fossil brand” … in the coverged media world, guess a reporter has to do a video standup as well as a game story at the NBA final—even if the reporter happens to be a florid Irishman … seems being a football player named “Paris” is like being a boy named “Sue.”