Small Balls: Wick and Wie: A study in contrasts 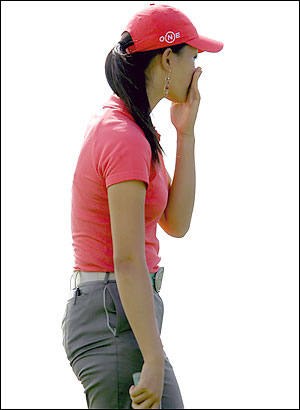 La première étoile: Canadian Frank Dancevic knocked off top-seed Mario Ancic at the Rogers Cup last night. No rest for the wicked, though. Dancevic takes on No. 3 seed Novak Djokovic (ranked behind Federer, surprisingly, still #1, and Nadal, #2) later today at the Rexall Centre.

Two minutes for … Trying, again, to run before she learns to walk. Fresh off a disqualification on the LPGA Tour, Michelle Wie has decided to tee it up against the men, again. Wickenheiser, a case in contrast, too strong for North America’s pro women’s league, is, again, taking her game to Scandinavia to prepare for the Olys.

Fun police: So, how goes the rehabilitation of the sorry image of Italian soccer? Not clean yet, apparently.

Extra bases: The Swedes—at least, the ones that read Aftonbladet—think Sundin will head to Toronto in the fall… Speaking of aging greats: Get the latest, “unconfirmed tip,” on Favre’s itch here… And, finally, the New Orleans Saints finally acquired Jeremy Shockey.