So a banker walks into a bar...

Financial reporters (including this one) have tortured countless metaphors in their quest to explain what the heck is going on in the economy. But sometimes funny does a better job. And at a time of falling markets and uncertainty, it helps to hold on to a sense of humour. So without further ado, here are some of the best financial crisis jokes, sketches and comic strips that have hit our inbox or been scavenged from the Interweb. (Note to viewers: a couple contain profanity.)

For starters, Reuters has pulled together a bunch of jokes about the financial crisis here, while there are a couple more here. My favourites:

Q: What is the capital of Iceland?

“I tried to get cash from the ATM today but it said “insufficient funds.” I don’t know if that meant them or me.”

Q: What is the difference between an investment banker and a pigeon?

A: A pigeon can still make a deposit on a BMW

From the beginning this crisis has befuddled economists, analysts and investors with its complexity, archaic acronyms and behind the scenes market manipulations. Making sense of it all has been a challenge. Leave it to a bunch of stick figures to succeed where so many others have failed. This power point presentation (which you can view online here) was one of the first attempts at explaining the complexities of the subprime meltdown with humour. And it succeeds because it makes the absurdly complicated subprime scheme seem blindingly obvious: 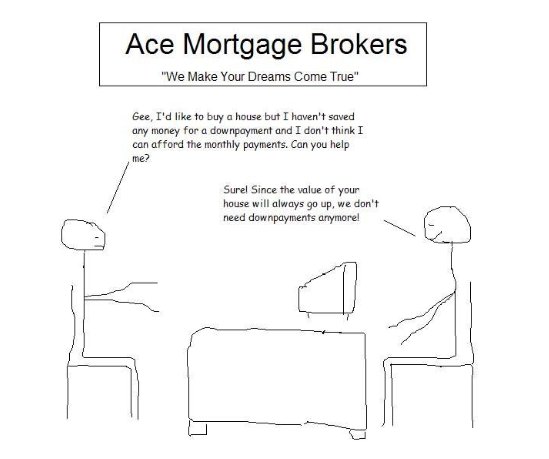 Likewise, the British comedians Bird and Fortune took a run at explaining the subprime mortgage market in this now classic sketch:

So far Washington has devoted billions, if not trillions, of dollars to bailout U.S. banks. How does something like that work? Think of it like a doomed Arctic expedition, says Marketplace:

Here’s a Sinfest comic that takes on the bank bailouts and cuts right to the point of what this means for the average American consumer. Bang on:

While we’re talking comics, here are three more on the market meltdown:

And finally, the mock Economist cover that the Economist wishes it could run (and frankly, us too): 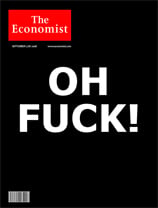 Credit to: the Big Picture, the Consumerist, Greg Mankiw, and all the folks with their finger on the Forward button.

PLUS: So a banker walks into a bar…II