So much for Harper's French-kissing skills 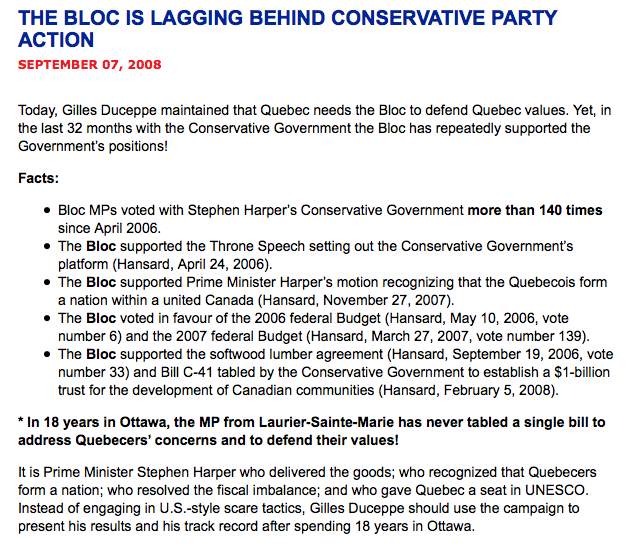 The graphic above, lifted from the Conservative website (hat tip to the indefatigable Elizabeth Thompson for pointing it out), is interesting for a couple reasons:

(1) It highlights just how much the Conservatives have relied on the Bloc to stay afloat in Ottawa. And…

(2) It shows just how much the Conservatives’ relationship with Quebecers has changed over the last couple of days.

During the election campaign, the Tories couldn’t emphasize enough the degree to which they’d catered to Quebecers’ whims, apparently going so far as to give above and beyond what the Bloc had actually been asking for. Now, we’re expected to believe that recognizing the mere presence of the séparatisses inside the halls of power is an exercise in treason and sedition.

It’s hard to underestimate the damage the Conservatives are doing to themselves in Quebec with their new line of reasoning. Tellingly, no political figure in the province—whether federalist or separatist—is willing to entertain Harper’s leap of logic. As far as credibility in the rest of Canada is concerned, it’s one thing to have Jacques Parizeau endorsing your demise. But it’s quite another to have John James Charest (aka Captain Canada) overtly accusing you of Quebec bashing.

The risks involved are as steep as they come. Harper’s first mandate had all the earmarks of beau risque politicking—the Québécois nation motion, the billion-dollar boost in transfers, the “we’re the real nationalists” stump speeches. What the Conservatives appear to have forgotten is that the Bloc’s very existence owes to the first time that strategy failed and it wouldn’t be a stretch to argue the 1995 referendum was direct outgrowth of that failure, too. Granted, no one’s stoked any Constitutional fires (yet). But the way things are going, it’s going to be mighty hard to convince some of the very same sovereignists who were around for Mulroney’s experiment that beau risque hasn’t failed again.