So now, it’s no business of the state

Quebec’s move to nix the niqab continues to tie Canada’s commentariat in knots. The funniest column to date was by Haroon Siddiqui, “editorial page editor emeritus” of the Toronto Star. Mr. Siddiqui was not impressed by the arguments mounted against the head-to-toe body bag—for example, the notion that it is a “symbol of oppression”:

“Let’s assume that it is,” he wrote. “Whose business is it to end the practice—that of the state?”

That’s pretty cute coming from a guy who, during this magazine’s long battle with Canada’s “human rights” commissions, argued at length that it was most certainly the business of the state to end the practice of Maclean’s carrying Islamophobic Steyn columns. If the state can regulate what you write and say and think and even (as in the lesbian heckler case at the British Columbia Tribunal) what you quip, it can most certainly regulate what you wear. In Canada, it would be quicker to list what isn’t the business of the state. “The state has no place in the bedrooms of the nation,” said Pierre Trudeau, unless, of course, you’re tucked up with a nice mug of cocoa reading an Islamophobic edition of Maclean’s. It was a classic bit of Trudeaupian legerdemain: if you’re allowed to roger anything that moves, or doesn’t, according to taste, you won’t notice all the other parts of your life the state has a place in. In Canada, it’s the state’s business when you get your hip operation, not yours: if the state has jurisdiction over your hip, why shouldn’t it also have jurisdiction over which garments the hip can be sheathed in? In Canada, a resident alien is not permitted to own a bookstore, on grounds of cultural protection. If “cultural protection” can prohibit a homosexual from San Francisco opening up a gay bookstore in Vancouver, why can’t it also extend to a Muslim woman’s dress?

And Quebec is Canada without even the residual restraints of the Britannic inheritance. In the interests of la collectivité, the province regulates not only the public usage of language but the very size of lettering in which your words can be displayed. If the state has power to set a maximum font on the ladies’ room door, why can’t it also set a limit on the yards of cloth you have to hoist up once you get in there?

Until Jean Charest decided to take the crimping shears to the niqab, Mr. Siddiqui had never met a statist initiative he wasn’t hot for. But statism is never about principle, only about power. Tyranny is always whimsical. If you’re an unemployed loser living in his parents’ basement in Dead Moose Junction and you put up a blog post saying Jews are vermin who should be kicked out of Canada, the Dominion’s heroic “human rights” champion Richard Warman will haul you up before the state commissars and destroy your life. But, if you’re Salman Hossain, alumnus of the universities of both Toronto and York, and you call Jews the “scum of the earth” and argue that “a genocide should be perpetrated against the Jewish populations of North America and Europe,” the valiant Prince Richard and the knights of the Canadian “Human Rights” Commission’s round table are curiously reluctant to saddle up. If you’re the genial young lads caught on tape outside Palestine House in Mississauga the other day taunting Jews with threats of another Holocaust, not only does the Canadian state turn a blind eye, it actively subsidizes this genial contribution to “diversity” with your tax dollars.

Statism is muscle. In Trudeaupia, that muscle has usually been applied against the political right. During the Ann Coulter fiasco a week or two back, Michael Lefive wrote to explain to me that I had a defective understanding of Canadian “freedom”:

“I find it interesting how freedom of expression is so poorly understood. I feel just as free saying you do not know what you are talking about as I would saying you’re an ignorant f–k.
“The question revolves around simple civility and the freedom of expression provided by a language’s potential for alternatives. I have lived in both Canada and the U.S., and the Canadian approach revolves around civility and inclusion of human differences while providing as broad an arena for opinion as I have found in the U.S.

“Canadians freely expressed themselves. Ann Coulter is not welcomed. That IS freedom of expression! Hate-mongers need not apply.”

Putting aside the fact that the only fellow using the words “ignorant f–k” is the guy bragging about his “civility and inclusion of human differences,” note what M. Lefive’s “simple civility” boils down to—labelling me and Miss Coulter as “hate-mongers” who “do not know what you are talking about.” Gee, with that kind of simple civility, why don’t we just cut to the bar fight? Likewise, Haroon Siddiqui airily attributes the anti-niqab campaign to “an unholy alliance of leftist feminists, right-wing bigots and Quebec nationalists.” “Bigots,” huh? Even in an unholy alliance, some allies are less legiti­mate than others. Mr. Siddiqui’s friends in public universities, in state media, in government agencies, in taxpayer-funded agitprop groups and the rest of bien pensant Canada have no problem labelling people as beyond the pale. Siddiqui’s mistake was in assuming he and the state would always see eye to eye about whom it was okay to revile. 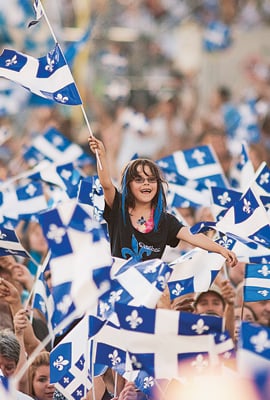 Floundering for an argument, he demands to know why, if the rationale is the secular nature of Quebec society, the government doesn’t also defund the Jewish General Hospital and tear down the crucifix at the national assembly. Oh, c’mon, is that the best you can do? That’s like saying, if Chief Commissar Jennifer Lynch’s rationale for the CHRC’s censorship powers is that history shows us powerful words can lead to dark deeds, why does she go after basement Nazis but not the tenured Marxists at every Canadian university in the name of whose political creed untold millions have died?

Perhaps Haroon Siddiqui will have better luck waging his campaign against state power than I’ve had with mine. He, after all, is not a “right-wing bigot,” but an exemplary pillar of the Canadian establishment. Why, I see he is a Member of the Order of Canada, which is not something I’m in any danger of this side of an alternative universe. Yet, even so, I would doubt he can win this one.

Almost as hilarious as English Canada’s anguished columnists, Lucien Bouchard cautions the Parti Québécois not to get mixed up with “identity politics.” What a card! Identity politics is, of course, the PQ’s raison d’être. Quebec nationalism came into being to protect Quebec’s “cultural identity.” Once upon a time, that didn’t need explaining: “La langue est gardienne de la foi,” Henri Bourassa said a century ago. The French language protects the Catholic faith. But the faith is long gone, and the churches are empty, and Quebec’s shrivelled, post-Catholic fertility rate combined with a constitutionally dubious, provincially controlled immigration policy has resulted in a recently arrived and ever swelling population from “French” (please, no tittering) North Africa and the Middle East.

Is that all that’s left of Quebec’s “cultural identity”? The lingo? Or to put it another way: suppose, in a few years’ time, the last elderly Anglos who still refer to Trois-Rivières as “Three Rivers” have died off and instead the streets of the province’s cities are clogged with niqab-clad francophones. Would Quebec feel it had won its battle to preserve its “cultural identity”?

Obviously not. Which is why 95 per cent of Quebecers favour the government’s niqab ban. Even in the ROC, support is running at about 80 per cent. Most of the social engineering and the remorseless dismantling of pre-Trudeaupian Canada takes place incrementally, under cover of darkness. The noxious brainwashing of our youth at Canadian universities is mostly concerned with theoreticals and abstractions. But the niqab and the burka are not abstract: they’re the starkest emblem of the gulf between one culture and another, and when they’re shuffling toward you down the sidewalk they’re telling you something about where your society’s headed. In that sense, they’re the most provocatively absurd of multiculturalism’s fatuities. Naema Ahmed’s lack of a face is, paradoxically, in your face—in a way that many of the multiculti delusions never quite are. It is also a reminder of our likely fate—that Western civilization will not be succeeded by a rainbow-hued utopia but by fractious and mutually hostile barbarisms.

At a certain level, the niqab wars are pathetic. They’re proxy battles for the real issues—on immigration, assimilation, and much else. But the niqab is blazingly vivid in a way that the big abstract nouns aren’t. And, whatever anglophone progressives may think, Jean Charest’s heavy-handed opportunism is in the grand tradition of Canadian statism.