Software creator John McAfee blogs while on the run

Software creator John McAfee started up a blog over the weekend declaring his innocence, as police continue to search for him as “person of interest” in a murder investigation.

Police in Belize have been looking for American ex-pat McAfee, the creator of the computer security software bearing his name, since Nov. 13, when his neighbour, Gregory Faull, was found dead with a bullet wound in his head. McAfee has been declared a “person of interest” in the case.

On the day after the shooting occurred, McAfee, 67, contacted Joshua Davis, a journalist at Wired magazine, to declare his innocence. 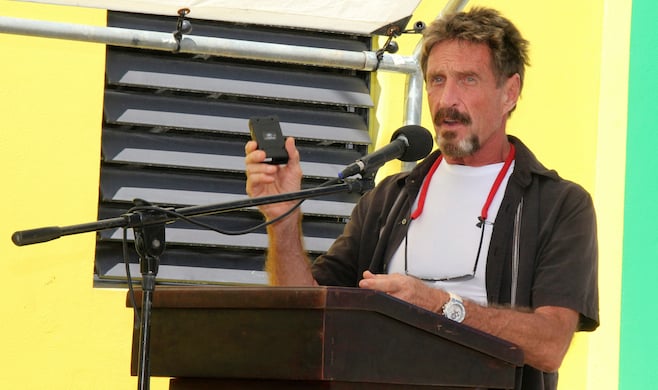 In this Thursday Nov. 8, 2012 photo software company founder John McAfee speaks at the official presentation of equipment ceremony that took place at the San Pedro Police Station in Ambergris Caye, Belize. McAfee, 67, has been identified as a "person of interest" in the killing of his neighbor, 52-year-old Gregory Viant Faull. (AP Photo/Ambergris Today Online-Sofia Munoz)

The latest development in the case is a blog that surfaced over the weekend, in which someone claiming to be McAfee writes in the first post: “With lots of time on my hands and very little to do with it, I’ve been reflecting on the recent detour my life has taken. How did I end up as a murder suspect on the lam?”

He goes on to lash out at “the world press” who have smeared his reputation, naming Davis from Wired and a second reporter from Fast Company by name.

The identity of the blogger at www.whoismcafee.com cannot be verified.

There have been 10 posts since the blog began on Saturday. The posts are either against the Belizean government, or describe life on the run with McAfee’s much-younger female companion, a 20-year-old named Samantha.

The latest post went up Monday morning. In that post, McAfee writes: “If I am captured, this blog will continue. I have pre-written enough material to keep this blog alive for at least a year.”

The blog also claims that McAfee is working on a graphic novel project called “The Hinterland.”

McAfee has been living in Belize since 2008. This isn’t the first time he’s been involved with the law in that country. Police raided his home in April, finding guns, chemistry equipment and $20,000 in cash. None of it was illegal and police eventually had to let McAfee go after holding him for 14 hours.