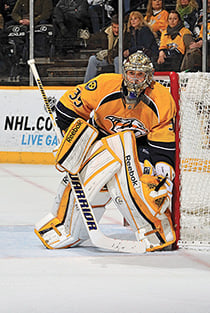 There is one thing about the game of hockey that has not changed since before hockey was hockey. It is an axiom older than the six-a-side game, older than the division into three periods, older than even Lord Stanley’s cup. It is there in the official rules of the Amateur Hockey Association of Canada, created in 1886 to select a national champion: goals are to be “six feet wide and four feet high . . . unless otherwise agreed.” One hundred and twenty-seven years later, those are still the official dimensions of the goal wherever hockey is played, from Hamilton to Hong Kong.

But the goalies did not, alas, stay the same size in the meantime. Many of you can probably name the starting goaltenders for any postwar year of the Original Six NHL: in 1960, they were Johnny Bower, Glenn Hall, Harry Lumley, Jacques Plante, Terry Sawchuk and Lorne “Gump” Worsley. None of these men was above six feet, and the Gumper was five foot seven. By contrast, the first six goalies taken in the 2012 NHL entry draft average six foot three, and the league already features galoots like the Senators’ six-foot-seven Ben Bishop and Tampa Bay’s six-foot-six Anders Lindback. The Oilers have a six-foot-five starter, Devan Dubnyk, and just traded for a six-foot-seven AHL goalie, Niko Hovinen.

As anyone who has seen footage of a 1985 NHL game since 1985 will be aware, the equipment goalies wear has grown in tandem with the men who play the position. It is a shock to see the tiny and ill-protected goaltenders in old games that are, for some, fresher in the mind than 2009. Efforts to rein in egregious advantage-taking have been semi-successful, but the arms race is unrelenting. For a while, goalies were adopting taller leg pads, threatening to deny shooters the “five-hole” between the legs altogether. The league has adopted a maximum pad height in response, but it has to be adjusted for each player: taller guys do have taller legs. Unfortunately, that may just create an incentive to invest in taller legs. You think six foot six is tall? Just wait.

Any change in the rules concerning padding tends to be tricky, because padding is, at least in theory, a workplace-safety issue. (In theory, advances in materials should allow goalies to play with ever-smaller padding, but it never works that way.) Goalies have recourse to labour tribunals or litigation if the league limits their protection in some way they don’t like. And so they are winning the arms race. In recent years, the overall save percentage in the NHL has increased steadily at a rate of about a tenth of a point per year—one fewer goal in every thousand shots on net. Sounds trivial, but on a base of 30 shots a game, that comes to half a goal every 17 years. Half a goal per game is a lot. These days, it’s about the difference between one of the two or three best offences in the NHL and the median.

Even if you, personally, prefer less scoring, you may not approve of the complete takeover of one position in the game by unnaturally huge players. The increasing emphasis on net-minder size deprivileges the acrobatics of the past; already, I think, we see less emphasis by commentators on glove-hand quickness and more on “positioning,” or covering pure acreage. Given a stubborn goalie cartel, and given that no one-size-fits-all solution to padding regulation will work anyway, that seems to leave one option if we want to give leverage back to the offence: tampering with the Holy of Holies.

Any change in goal size, needless to say, should be fractional—almost certainly less than an inch in either direction. (Elliotte Friedman’s “30 thoughts” column for the CBC hints that the idea is actually being kicked around.) Baseball historians who remember the pestilential offensive effects of the lower pitcher’s mound of the 1960s know that incremental tweaks are best. Growing the net might seem unfair to older goalies, but then, it was unfair to older stand-up goalies when a generation trained in the “butterfly” style ransacked their citadel. In all likelihood, a change in goal size would help some goalies and hurt others, relative to the median. And it would benefit different skaters unevenly, too. But one thing is certain: a bigger net could not possibly lead to less scoring.