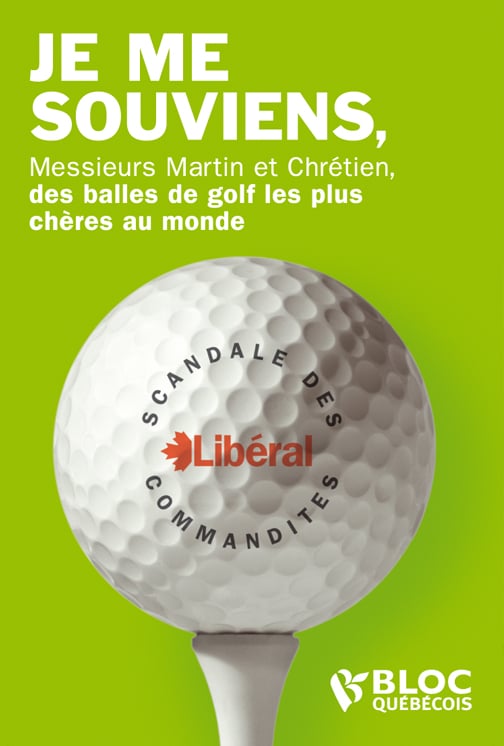 Jean Lafleur, the Quebec ad man who pleaded guilty last year to 28 charges of fraud in connection with his role in the sponsorship scandal, claims he’s flat broke. Lafleur has filed for bankruptcy, citing his criminal conviction as the reason for his recent economic hardship.

Of course, times haven’t always been so tough for the man who always had a bit of spare cash laying around when the federal Liberals needed it. (Though Lafleur always seems to have trouble remembering those heady, post-referendum years when it was Quebecers who needed constant reminders they were indeed living in Canada.)

Documents tabled at the inquiry Monday showed that Lafleur’s company took in $31.9 million in sponsorship and advertising contracts involving the federal government between 1994 and 2001, and another $28.5 million from federal Crown corporations over that same period.

That’s a total of $60 million in public funds.

Lafleur personally earned more than $9.3 million while at the helm of Lafleur Communication Marketing between 1994 and 2000, his salary rising from just over $100,000 to $2.5 million.

During the same period, Lafleur’s wife, daughter and son earned a total of $2.8 million, though they had earned nothing before the sponsorship contracts started to flow in.

It’s not clear what will happen to the $1.3-million Lafleur still owes in fines, nor how the bankcruptcy will affect the $6.5-million the feds are seeking in restitution for his role in the massive fraud. The Crown, however, doesn’t seem to be buying Lafleur’s pauper routine: they plan on requesting that Lafleur’s financial situation be looked into.