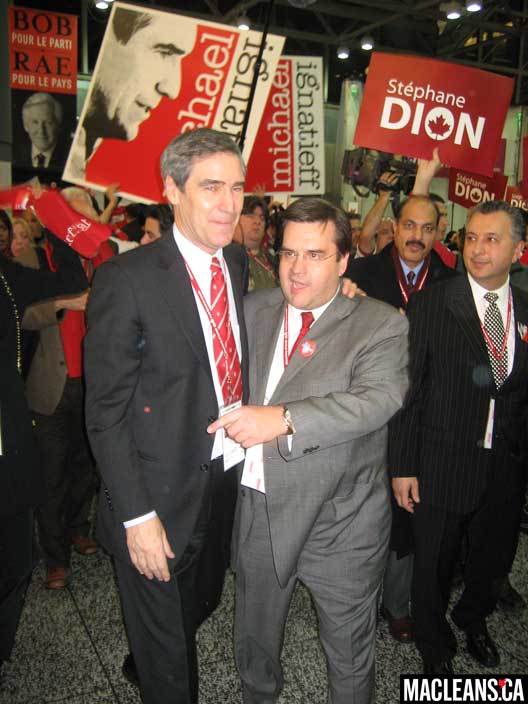 Ah, those were the days.

The headlines alone are a train wreck: “The Quebec Wing Of The Liberal Party Decapitated”; “Ignatieff’s Toronto Advisors Flayed“; “Wounded Ignatieff Faces Test Of Leadership“; “Headless Body In Topless Bar” (just kidding–that would be something to read).

The common thread in the acres of column inches under these fragrant headlines is this: in failing to extinguish the Coderre-Cauchon catfight–and, in fact, actually escalating it–Ignatieff has failed his first true test as leader of the Liberal Party. He has doomed the party’s chances in Quebec where, hungover as we still are from a certain sponsorship whoopsie, he was in rough shape to begin with. Add a raft of cascading poll numbers and voila!, the Liberal Party is toast. Here in Quebec, and everywhere else. Call the moving company, Zsuzsanna, we’re going back to Harvard. Hell, L Ian Macdonald was on the radio the other day musing about la fin de Iggy–though big grain of salt here, given Mr. Macdonald’s credentials.

Here’s the thing, though: Coderre’s departure is in many respects a good thing, and one need look no further than Coderre’s kiss-off yesterday as evidence.

You don’t need to dig into the archives to taste Coderre’s knack for placing knives between shoulder blades. In his comments yesterday, the lifelong Liberal repeatedly stuck it to the party he professes to love. In raising the notion that what is best for Quebec is decided in Toronto–a silly thing to say, considering the federal Liberals are relying on key Charest advisors to help deliver the province–Coderre gives a gift to the Bloc québécois, and I’m willing to bet anyone reading these words that Coderre’s bon mots will find their way onto the BQ’s campaign literature in the next election.

Do you really want someone like this, someone who acts like a belligerent crybaby when he doesn’t get what he wants, minding the store in the next election? Look at Outremont for a second. I know next to zilch about Nathalie Le Prohon, Coderre’s handpicked candidate there. I’m sure she’s nice and all, but Thomas Mulcair has successfully coloured old, red Outremont a shade of orangey-green, and in order to right things there the Liberals need a slam dunk. Martin Cauchon is a slam dunk. Coderre knows it, but pettiness and ego got in the way.

One last note. Jean Lapierre, himself a former Quebec lieutenant, wondered out loud today how the Liberal Party could possibly get by without a Quebec lieutenant. “I don’t see how this could work,” said the Liberal-turned-Bloc-turned-television analyst-turned-cabinet minister-turned-television analyst. “The Liberal Party has always had a political lieutenant since Ernest Lapointe.” Exactly: it’s a vestige of the past that should be done away with. Everything about it, right down to the name, has a Duplessis-esque quality to it, suggesting that Quebecers need to be overseen, prodded, herded, or what have you by a someone with a militaristic title. Denis Coderre, Quebec Liuetenant? Salut la visite, as they say.