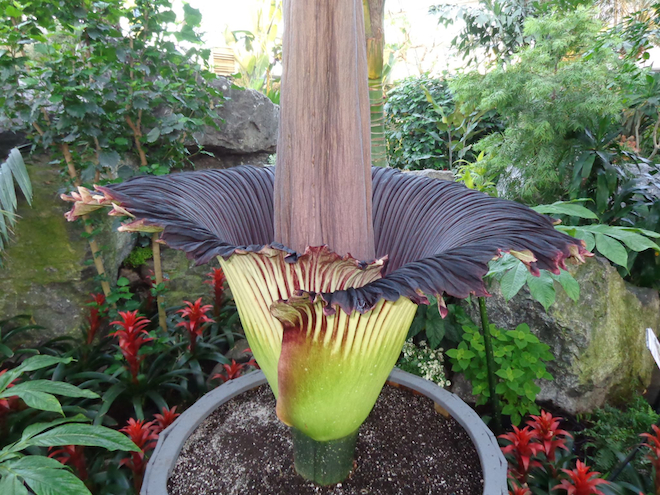 The corpse flower in bloom. (Muttart Conservatory/City of Edmonton)

The tallest flower in the world is blooming in Edmonton and it is also emitting a putrid stink with its blossom.

The Amorphophallus titanium, or “corpse flower” as it is more commonly known, is on display for visitors at the city’s Muttart Conservatory. The flower is around eight feet tall and its stink is “to attract pollinators such as carrion beetles,” says the City of Edmonton on its website.

Staff at the conservatory have been on bloom watch since early April and even gave the flower the nickname “Putrella.” The corpse flower finally bloomed overnight Sunday, just in time for Earth Day. “Putrella’s bloom is stunning — and incredibly stinky,” the conservatory wrote on its Facebook page Monday morning.

The plant now weights in at about 275 pounds and has been in the conservatory since August 2012, where it started as just a small bud. “It’s very exciting,” Muttart head grower James McIvor said in a release issued Monday. “In under 40 days, Putrella has grown from a bud, less than an inch tall, to this incredible display. I can’t tell you how fortunate I feel to be able to see a corpse flower in bloom.”

This is the first time a corpse flower has bloomed in western Canada.

The flower will last between two and four days and its stink will be strongest when it first blooms. The conservatory is open late — until 11 p.m. — to allow everyone to see, and smell, the bloom.

Here’s a video of a blooming corpse flower at Miami University, where observers described the smell as similar to: garbage, road kill, dead fish and/or rotting cabbage.