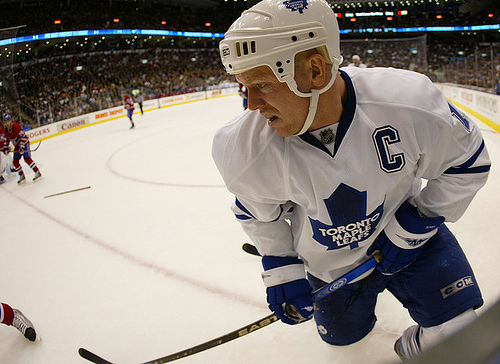 The saga continues. According to this update from TSN’s Bob McKenzie, whose information is generally solid, Sundin is likely going to wait it out ’til July 1. Contrary to earlier reports (to which we foolishly linked), Bob Gainey has not yet flown to Sweden. He’d just like to.

So we thought we’d catalogue the reasons Mats might not be so eager to join the Habs. Add any you please, within the bounds of good taste (i.e. no franco-baiting):

• Taxes. Players in Quebec pay more than any in the league.

• Habit. He’s spent his life battling the bleu, blanc et rouge, first with the Nords, now with the Leafs. This would be like changing religions.

• Loyalty to the Leafs. Apparently this stuff matters to him, and it sounds like Toronto has made Sundin an offer which he has not yet refused.

• Disgust with the Leafs. He was legitimately miffed with the pressure brought to bear on him to waive his no-trade clause last February (see Loyalty, above). If Sundin’s still bitter, he’ll want to do them no favours, and jumping to the Canadiens now would ensure the Leafs get something for him. Not sure I buy this—bitterness, sure, but not vindictiveness.

• Too many egos in Montreal, not enough dressing room. There’s a fine line between great chemistry and a surfeit of alpha dogs. You have Sundin, Koivu, Kovalev, Higgins on the same team, not to mention Tanguay, Hamrlik, Komisarek, Markov. Who doesn’t get to wear a letter on his jersey? Plus, some people don’t much like playing with Alex Kovalev. He’s wonderful to watch, and he’s learned to rein in his big mouth. But he’s not exactly Mr. Generosity with the puck. Consider, too, that the Rangers might be without Jaromir Jagr next season …

• The wife. Wild card here. The guy just got married. Anyone consider where she might like to live?