'It is our legacy,' artists says of garbage found on beach

Barry Rosenthal is not an archaeologist. The objects he finds washed up along the oceanfront, however, he sees as a type of current archaeology. “It’s our legacy,” he says. “This is what we’re leaving behind.” It’s hardly glamorous, but part of Rosenthal’s work involves walking along beaches scouring for trash. The project started on New Year’s Day in 2007, when he went out to the Jersey Shore to snap photos of nature—namely, plants. He arrived at a bird sanctuary but, instead, saw what he describes as a desert with pieces of coloured plastic poking out from the sand. So he started to pick up the stuff and bring it back to his studio in Brooklyn.

The Found in Nature photo series started with an assortment of bottle caps that he spilled onto white paper to photograph. Drawn in by how nature made these items look beaten up and aged, Rosenthal started scoping out other marshes and coastal areas nearby. The beach is his flea market, as his website describes it, and Rosenthal has collected needles, toy shovels and enough shoes to organize the left and right feet symmetrically. Like a street-sweeper, he doesn’t pick and choose. Everything is grabbed in bulk and organized later, perhaps by item or colour, though one theme remains constant. “It has [to have] a connection with the ocean,” he says. “It wasn’t that I was going through the dump and collecting trash.”

Spending full days at the beach may sound relaxing, but Rosenthal won’t be found in tourist hot spots where children frolic and adults lie on beach towels. “The places I go to are kind of nasty and, usually, I’m the only person there,” he says. And if he’s ever missing a specific item to photograph, there’s no shortage of coastline to explore. “It’s great to have a free resource but, of course, it’s not great,” he says. “After working on this project for a few years, I started to realize what the ocean must be like, and I just don’t go swimming anymore.”

Swept in from the sea 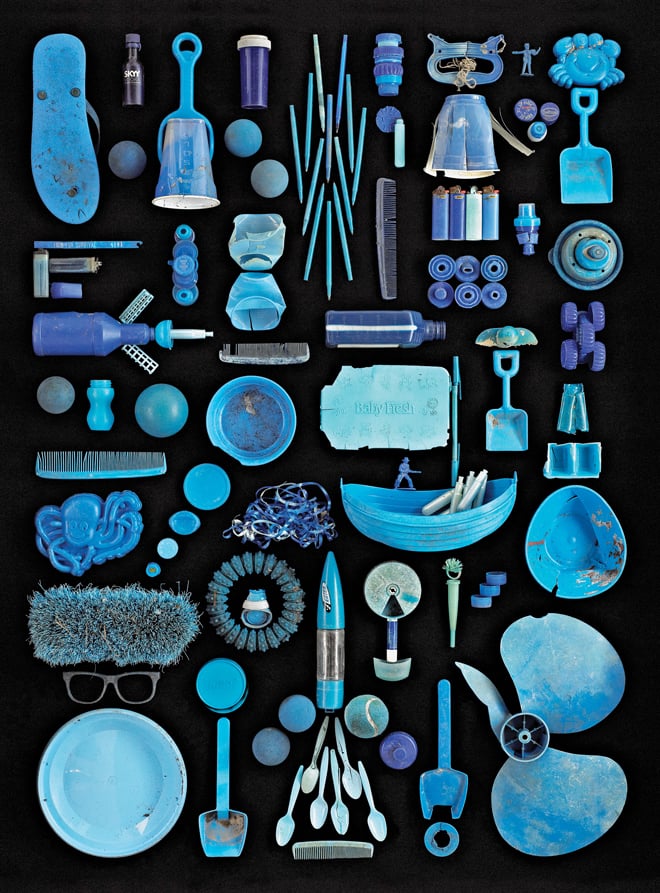 Blue-coloured items that have washed in from the ocean. (Barry Rosenthal)