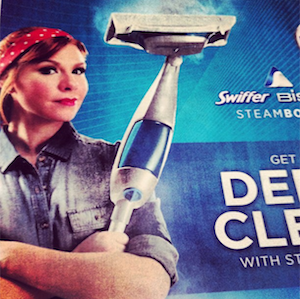 Swiffer is mopping up consumer backlash after the brand, owned by parent company Proctor & Gamble, used the iconic image of Rosie the Riveter in a campaign to sell a new steam mop.

Heather Beschizza alerted The Atlantic Wire to the image, which she spotted on Sunday. It showed a slightly sexier picture of Rosie, the image that became an iconic part of American war-time propaganda and encouraged women to aid in the WWII effort by working in factories.

However, instead of showing off her bicep — as in the most iconic Rosie the Riveter image — the Swiffer version was brandishing a steam mop. Beschizza tweeted: “We can do it! Because cleaning kitchens is a woman’s work.”

The image of Rosie was also featured on the Swiffer Bissel Steam Boost web page, but it has since been removed.

Beschizza’s tweet wasn’t the only angry message directed at Swiffer, and company posted this reply to those offended:

We hear you. We didn’t intend to offend any group with the image in our ad & are working to make changes as quickly as possible.

And then it went about with is usual, non-sexist advertising, in which it talks to men about cleaning their garages and shows women actually using its products.