Technotronic breathes a sigh of relief 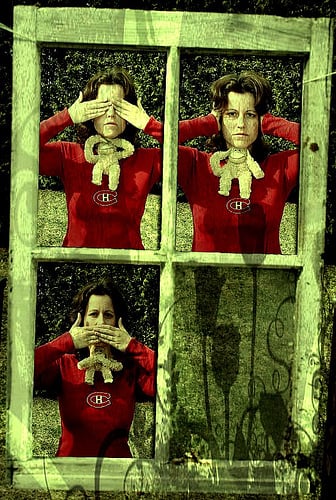 So politicians are supposed to mandate more French music be played during Habs games at the Bell Centre now? That’s what book publisher Michel Brulé was calling for earlier this week. And he had a petition-yes, a petition!-to boot. Apparently, it’s high time the government step in and forcibly remove the C+C Music Factory CD from the arena DJ’s cold dead hands collection and replace it with, um, some Mononc’ Serge perhaps? Or maybe some Claude Dubois would be more appropriate, especially after the “racist and insulting” CBC did away with Dubois’s performance at the Canadian Songwriters Hall of Fame induction ceremony.

Thankfully, Quebec Culture Minister Christine St-Pierre quickly poo-pooed the idea of getting involved in the Bell Centre’s musical selections. That’s not to say it couldn’t use a bit of a makeover. But good taste isn’t exactly the Charest government’s forte.

Still, what’s most odd about Brulé’s one-man-and-his-mighty-clipboard campaign is that it’s another in an increasingly long list of bizarre attempts to imbue the Canadiens with nationalist fervour. When Daniel Brière declined to sign with the Habs last summer, La Presse‘s Stéphane Laporte pilloried the Flyers’ forward for turning down the opportunity “to play for your gang, for the people who speak the same language you do.” A few months later, it was Saku Koivu’s turn to get the Uncle Tom treatment. After introducing his teammates in English only during the team’s home opener, Koivu met the wrath of sovereignist-cum-federalist-cum-sovereignist lawyer Guy Bertrand, who claimed Koivu’s linguistic faux pas “demonstrates contempt for our language.”

The reason it seems odd to try and turn the Canadiens into modern day Patriotes isn’t just the ridiculousness of the specific requests-it’s that the Habs have generally been associated with the other side of the coin. (It used to be the Nordiques’s job to have the fleur-de-lys tatooed on their hearts.)

Consider: the Habs haven’t had a francophone captain since Vincent Damphousse in 1999; Serge Savard, one of the province’s most vocal cheerleaders for Canada, used to run the team; fellow Hab great Guy Lafleur remains an ardent federalist; Jean Béliveau was once offered the Governor General’s job; and, while the team’s former long-time owners, the Molson family, may have lubricated many a sovereignist rally, the company’s “I am Canadian” TV spots left little to the imagination as far as its alliances were concerned.

Of course, that doesn’t mean Quebec nationalists don’t (or shouldn’t) cling to the Habs. It just means there’s a long, long legacy to rewrite if they hope to turn the organization into poster-children for independence.