This morning’s New York Times describes the late John Updike as “a literary decathlete” who was “almost blogger-like in his determination to turn every scrap of knowledge and experience into words.” Indeed. The Pulitzer-Prize-winning author, who died of lung cancer on Tuesday, left behind more than 50 books, countless short stories and a collection of poetry— 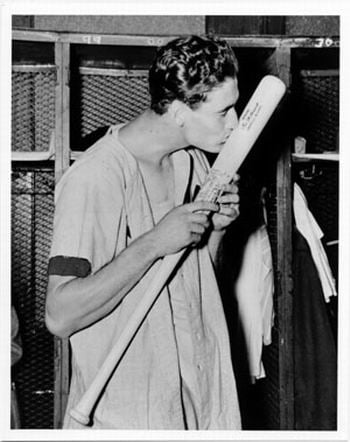 including a memorable ballad about the bleacher seats at old Yankee Stadium.

Published in The New Yorker 49 years ago, “Hub Fans Bid Kid Adieu” recounts the Splendid Splinter’s final home game at a “lyric little bandbox of a ballpark” known as Fenway. Unlike his fellow “maestros of the keyboard,” Updike did not watch the game from the comfort of the press box high above home plate. He sat in the third base stands, surrounded by 10,000 schizophrenic Red Sox fans who adored their aging hero almost as much as they despised him.

I read the article yet again last night. You should too.

“The affair between Boston and Ted Williams has been no mere summer romance; it has been a marriage, composed of spats, mutual disappointments, and, toward the end, a mellowing hoard of shared memories,” Updike wrote. “The left-field stands at Fenway for twenty years have held a large number of customers who have bought their way in primarily for the privilege of showering abuse on Williams. Greatness necessarily attracts debunkers, but in Williams’ case the hostility has been systematic and unappeasable. His basic offense against the fans has been to wish that they weren’t there. Seeking a perfectionist’s vacuum, he has quixotically desired to sever the game from the ground of paid spectatorship and publicity that supports it. Hence his refusal to tip his cap to the crowd or turn the other cheek to newsmen. It has been a costly theory—it has probably cost him, among other evidences of good will, two Most Valuable Player awards, which are voted by reporters—but he has held to it from his rookie year on. While his critics, oral and literary, remained beyond the reach of his discipline, the opposing pitchers were accessible, and he spanked them to the tune of .406 in 1941. He slumped to .356 in 1942 and went off to war.”

Williams hit a deep home run in his final at bat that afternoon. Even at 42 years old, his swing—like Updike’s description of it—was flawless.