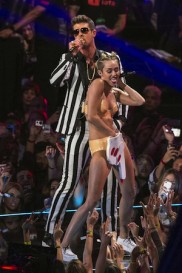 Now Oxford Dictionaries has gone and legitimized the twerk by adding a definition of “twerking” to its online site.

Just in case you were wondering, the official definition of twerking, as determined by Oxford, is:

Still not sure? Oxford also offers some helpful suggestions about how to use twerking in a sentence:

just wait till they catch their daughters twerking to this song
twerk it girl, work it girl

Though, Maclean’s doesn’t recommend the use of the second sentence in polite conversation, well, ever.

Before you cry foul over the death of the English language, it’s important to note the difference between the Oxford Dictionary and Oxford Dictionaries online. The online dictionary adds about 1,000 new words every year, with quarterly updates, reports BBC News. It’s designed to adapt to new language usage as it emerges.

And, just because a words gets into the online version, it doesn’t mean it will be included in the official Oxford Dictionary.

Some of the other new words included in the online dictionary are:

bitcoin: a digital currency in which transactions can be performed without the need for a central bank

food baby: a protruding stomach caused by eating a large quantity of food and supposedly resembling that of a woman in the early stages of pregnancy

selfie: a photograph that one has taken of oneself, typically one taken with a smartphone or webcam and uploaded to a social media website