REVIEW: The Bear: History of a Fallen King 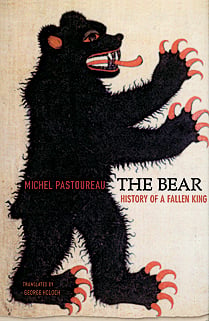 The animal that dominated the forests of prehistoric and early medieval Europe—and the collective unconscious of Europeans—was, naturally, the largest and strongest creature there, the brown bear. A vital element in cultural and religious life, the bear was admired by warriors—including Viking berserkers (“bear-shirts”) who strove to emulate its strength and fearlessness—and valued as a founding father by prestigious family lines that claimed ancestry from the half-man, half-ursine offspring of women carried off and raped by bears.

Uncannily human-like in its diet, supposed sexual tastes and ability to stand upright, the bear was seen as an intermediary creature dwelling between the human and animal worlds. It appears in countless myths: Paris, who stole away Helen and sparked the Trojan War, was raised by a she-bear whose milk gave him a taste for abduction. And it has always provided personal names in various European languages, from the epic hero Beowulf (meaning bee-wolf, meaning honey-loving bear) to tennis ace Bjorn (Bear) Borg. What drove Europe’s king of beasts from his throne and demoted him to the pitiful dancing entertainer of the late Middle Ages is the core of Pastoureau’s engrossing book. And the short answer is Christianity.

Everywhere from the Alps to the Balkans, the bear and his war-loving cult were rivals to Christ and his worship, impediments to the conversion of pagan peoples. St. Augustine declared that “The bear is the devil himself.” The Holy Roman Emperor Charlemagne spent half a century forcibly Christianizing southern Germany, destroying sacred pagan groves and—acts little noticed by most historians—organizing mass slaughters of bears. (Pastoureau calls the emperor “the greatest enemy to the bear that Europe ever knew.”)

By the High Middle Ages the dethronement was complete. But the old king, even when replaced by the lion, never really left the European imagination, the French historian argues. It continued to surface in legend and sexually tinged story—Beauty and the Beast—right up to the age of the teddy bear. That’s an enduring cultural phenomenon Pastoureau is happy to see as an ironic gesture of ursine revenge: westerners once again sleeping with bears.

FILED UNDER: Michel Pastoureau The Bear: History of a Fallen King