The first victim of climate change

Scientists think the white possum might be the first ever victim of global warming. The nocturnal animal hasn’t been sighted for three years despite extensive searches. Researchers say the animal could be the first ever extinction brought about rising temperatures. The tree-dwelling white possum is native to the Daintree rainforest in Tropical North Queensland, Australia. It is particularly vulnerable to changing temperatures because they are unable to regulate their body temperature in extreme heat. Professor Stephen Williams of James Cook University in Queensland said the mammal had not been seen in its natural habitat since the area experienced a temperature rise of more than 0.5 of a degree.

Of all the animals endangered/extinct this has got to be one of the cutest. 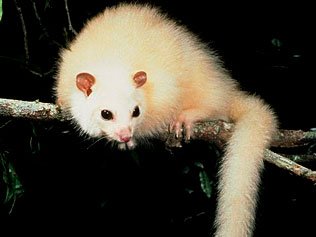