The graceful end of the Trans-Canada Highway

NOW: (Victoria) Tristan and I drove the final hour right through to the very end of the highway this morning – or is that the very beginning? 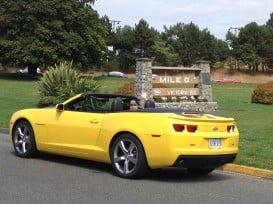 At Mile 0 in Victoria

The sign says “Mile 0” and as journalist Walter Stewart wrote in 1965, “the Trans-Canada Highway (is) the world’s only national roadway that has two beginnings and no end. You start from Mile 0 on Water Street in downtown St. John’s, Newfoundland, drive 7,714 kilometres, and finish up in Beacon Hill in downtown Victoria, where the sign reads – guess what? – Mile 0. Neither city wanted to be at the tail of the procession, so we made a road with two heads and no foot. Very Canadian, very sensible.”

That was close to 50 years ago and much has changed since. The road no longer starts in Newfoundland in downtown St. John’s – as I discovered on the first day of this journey, it starts at the dump – and the distance is now more than a hundred kilometres less, including the salt-water distance covered by the ferries that connect Newfoundland and Vancouver Island to the mainland. 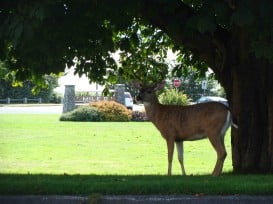 While the eastern end of the highway is purely practical, because Newfoundlanders generally consider it to be the road across their province rather than the road across Canada, the B.C. terminus is still graceful and beautiful, once it’s finished pressing through Victoria’s congested downtown. The Trans-Canada ends at Beacon Hill Park and today there was a young deer grazing under the trees near the sign. It seemed a world away from the moose I was warned about constantly back East.

It’s also no longer a challenge to drive; anyone with a licence and a vehicle can do it. Rush along and it can be covered in a week, though those are long days filled with driving and not much fun. But slow it down and everything changes – the highway becomes a necklace across the country, linking the Canadian provinces and their people to each other in a tangible, physical, highly visible way. There’s still a romance to be found on the road if you want to look for it: it’s right there beneath your feet, under your tires, waiting to show you Canada.

THEN: (Victoria) The Malahat Highway, which goes over the mountain just north of Victoria, was completed in 1912. 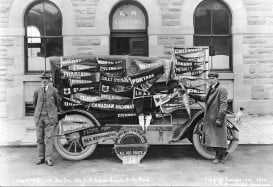 Wilby and Haney in Victoria

Thomas Wilby and Jack Haney drove it to arrive at the provincial capital on Oct. 18 that year, 53 days after leaving Halifax, and I’m sure the end could not come too soon for the pair. They’d grown to despise each other. For an account of the journey, take a look at my story in Maclean’s magazine here.

They went straight to the provincial capital building beside the harbour to deliver various pieces of mail to the mayor that dignitaries had given them along the way, and then to the coast to pour their remaining bottle of Atlantic water into the Pacific. That night, as in Vancouver, they were feted as heroes – or at least Wilby was. Dinner was at the Pacific Club and Albert Todd – of the Todd Medal – spoke, then the deputy minister of public works, and then Wilby.

In his book A Motor Tour Through Canada, Wilby says that “It was after the car had been stripped of the appurtenances of travel – after the speeches of the banquet at the Pacific Club – that I strolled out under the stars to the Douglas obelisk in the Parliament Grounds… Sir James Douglas, who had pre-visioned the day when vehicles would make the crossing of the Canadas to the Pacific! Linking east with west – a trail from Hope to the Kootenay across the Rockies, meeting at Edmonton a similar road built westward from the Atlantic – a great highway should cross the continent by which emigrants from the maritime provinces might have easy access to British Columbia. As in the days of Sir James Douglas, so now Canada needs the Transcontinental Highway for the unification of her peoples.”

It was not that simple, though. Wilby and Haney left separately to return east on separate trains and never spoke to each other again. Indeed, Haney rarely spoke of the adventure at all. And it would take another 50 years before the Trans-Canada Highway would be declared open, and another decade after that before it could really be considered finished.

And it’s still not finished, though it is complete. It will never be truly finished, because it’s improved, widened, straightened, smoothed over with every year that passes. In another hundred years, who knows what the Trans-Canada will look like, or what route it will take? But it will be there, linking the provinces, lending its iconic route to the country, never to be taken away.

SOMETHING DIFFERENT: (Victoria) Louise Rouseau lives at Mile 0 House, right opposite the famous sign in Beacon Hill Park. Her cousin owns the building and she visited in 1961 on her honeymoon, the year before the TCH was opened officially. Is there anything different about living right at the end of the Trans-Canada Highway? 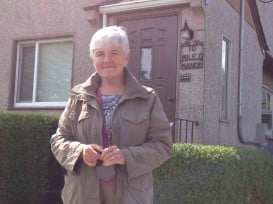 “Oh yes,” she says, “there most definitely is. You see a lot of stuff here – some sad, some good. One guy drove off the end of the road, down the cliff. He was trying to kill himself. It didn’t work though and he walked back up on the steps.

“People come to see the Terry Fox statue. Many tour buses stop here, but I don’t know if they know that it’s the end of the Trans-Canada. I tell them if they ask. Sometimes, when I’m out with my grand-daughter, we get swarmed by a tour bus. We get our photo taken – a lot.”

SOMETHING FROM TRISTAN, 12: (Victoria) Today will be my last and final day of blogging and I am happy about it because I will no longer have to stay up late writing it. Now I can stay up late watching TV. 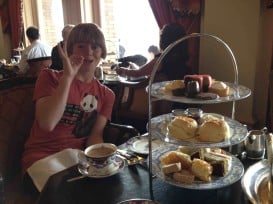 Afternoon tea at The Empress

We had tea at The Empress hotel today and everything in there was so fancy. I was so afraid to do something wrong, but I got through it without doing anything wrong, I think.

So as I said earlier this is my last day of blogging, so I would like to wish all of the people who read my blog a farewell. Goodbye to all.