The inevitability of legalized gay marriages

Why the Iowa ruling is a sign of things to come 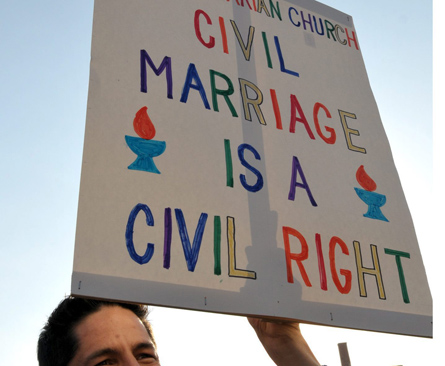 A headline in Saturday’s New York Times—41 years to the day Martin Luther King was murdered—stated that “Iowa Court Clears Way for Same Sex Marriage.” If a state supreme court in middle America can find that a law defining marriage as a union between a man and a woman is unconstitutional, America had better start bracing itself for the inevitable: Similar laws will eventually be struck down elsewhere. True, only Massachusetts and Connecticut currently allow gay marriages. And yes, with Proposition 8, California banned same-sex marriages just recently. But I predict the Iowa ruling is a sign of things to come.

In 2000, I decided to become involved in a presidential primary in New Hampshire to get some real life, hands-on experience in US politics. Not inclined to conservative politics, I looked to the Democratic field, which included then-vice president Al Gore. Gore was pitted against a serious challenger in the person of the former New Jersey senator Bill Bradley. I chose Bradley’s side because I felt an insurgent’s campaign was more freewheeling and attracted people bent on defending a cause more noble than continuing to wield power. Bradley’s campaign did not disappoint and, within a day or so, I was writing letters alongside his campaign’s gay rights committee to argue that gay rights was the civil rights issue of our day. Of course, this was taking place over 25 years after Harvey Milk’s assassination at the hands of a homophobic colleague in San Francisco. What it showed was that we had not gone as far as we thought in promoting equal rights and fighting discrimination. Bill Bradley had defined the issue in a novel and noble way and the gay community welcomed a straight guy such as myself in their effort to promote a just cause. I must admit this was an illuminating and uplifting  experience. After all, my hero was more Dr. King than Harvey Milk.

Since that campaign, the issue has remained a part of America’s culture wars. Referenda set up by the Rove-driven Republican machine in 2004 brought scores of evangelical voters out to vote for propositions defining marriage as a heterosexual institution. When Bush was re-elected, many concluded Rove’s manoeuvre went a long way to ensuring the Republican victory. Last November’s Proposition 8 was another major setback for the cause. It left many in California shocked that a state that voted overwhelmingly Democratic and for Barack Obama could quash a right that had been won in the courts of that state. But Iowa brings hope.

No one expects religious groups to embark on a crusade in favour of gay marriage, although some religious leaders have. The goal here is same-sex civil marriages, just like we have in Canada. It is a recognition of social and economic realities that people who love each other and decide to share their lives together should enjoy the same rights in all aspects of human life, whether they be heterosexual or gay. It is the right and moral thing to do. And it is only a question of time before America follows the same path as its northern neighbor. Iowa has simply paved the way for the inevitable.