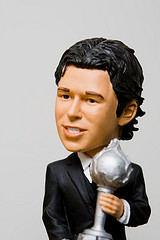 When the Detroit papers are celebrating a Pens win in the Stanley Cup final, you know the series has gotten a little stale. But be careful what you wish for, boys. Momentum’s a fickle thing, and as invincible as the Wings have looked lately, they did go into a swoon around the middle of the season…

‘Nother common take: Sid the Kid put the team on his shoulders, a la Messier, and brought them back from dead. Like this writer, I’m a little less sure. It was a helluva game for Crosby, but his manner of taking over a game may never be as obvious as a Messier “guaranteed win” night, or a Gretzky flourish. I’ve been struck in the past (and written about) Sid’s peerless ability to make plays with one touch of the stick, which today’s style of play demands. His goals last night reflected that uncanny ability.

Either way, it is nice to see Pittsburgh back in this thing. Malkin wakes up and who knows what could happen.