The last trees and the last rocks

NOW: (Winnipeg) Once you leave Ontario (finally!), the Trans-Canada widens and straightens and splits into four divided lanes all the way across the prairie. It’s fairly easy country for road building, passing through rolling agricultural land. 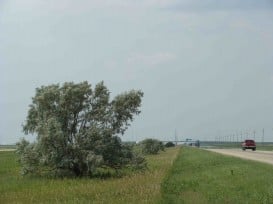 The most easterly prairie highway trees?

There’s a game you can play, driving either west or east, of looking for the last/first rock and the last/first tree. Before I discovered the prairie, I assumed it’s an immediate thing at the provincial border: that 100 metres to the east of the line there are forests and lakes, and 100 metres to the west, there’s wheat. That’s not the case at all, because there are more than 100 kilometres of woods and water in eastern Manitoba, including Sandilands provincial forest and Whiteshell provincial park.

The rocks end pretty quickly, though: today, I spotted the last outcrop near McMunn, which is about 40 km west of the border, and that was pretty isolated.

The trees took another 100 km or so, ending quite abruptly near Ste. Anne. Sure, there are plenty of trees around, planted in copses by hand to protect farms from the cold winter wind, but it’s noticeable enough that we emerged from the forest and Tristan couldn’t help but exclaim, “Look! We’re on the prairie!”

THEN: I don’t know who won the silk hat in the bet I wrote of yesterday – that’s one of the reasons I’m here now, to poke through archives and discover stuff I can’t find on Google or over the phone. I suspect it was the Ontario minister, for I have a news article from the day that suggests the Ontario stretch of highway to the provincial border was ready before the Manitoba stretch. 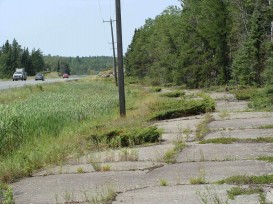 The old Ontario road to the Manitoba border, seen today

The road between Winnipeg and Kenora was finally completed in 1932, and this is its 80th anniversary. The highway was opened officially with a ribbon cutting on July 1 that year, Dominion Day, followed by a “program of sports and entertainment arranged by the two towns of Kenora and Keewatin.”

Manitoba’s minister of public works, W.R. Clubb, was there to represent his province and it must have been a satisfying day for him. Two years earlier, he’d written a guest editorial in the Toronto Mail that declared “a highway joining the east to the west must be a potent factor in establishing and maintaining cordial relationship … The aviator may fly with the swiftness of a falcon from one place to another, but, cut off from all association with his fellow, he flies in the chill isolation of the clouds. Travelling by rail is a very formal affair. The traveller is hurried along by a rigid officialdom whose great aim is to detrain him at a certain destination on the moment of time specified. He has but one choice – the choice of destination.

“The vision of a completed Trans-Canada highway presents to the mind of the motorist many pleasing and educational prospects. He may loiter at will by many a shaded dell or meandering stream; and he may deviate from this broad highway to acquaint himself with strange communities and strange peoples.

“Racial animosities and interprovincial differences – and these are largely due to ignorance on the part of both in regard to the other’s point of view – are being dispelled by a freer intercourse, and, undoubtedly, the construction of the Trans-Canada extension east is another great step towards perfecting our national unity.”

SOMETHING INTERESTING: (Near Winnipeg) Aha! This sign along the Trans-Canada just east of Winnipeg suggests that maybe I was onto something a few days ago when I questioned in this blog post just where the halfway point of the TCH actually lies. 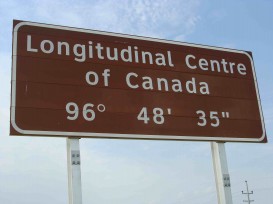 I thought then that we had more distance to travel, although the highway heads north and south for many kilometres in the east: along Newfoundland’s west coast, up through New Brunswick to skirt Maine, and north beside Lake Superior through Wawa, where the halfway point claims to be.

However, although the TCH travels almost to Canada’s easterly point, reaching St. John’s, its western terminus in Victoria falls well short of the most westerly point in the country. Canada’s most westerly community is Eagle Creek in the Yukon, the last stop before the Alaska border which follows the 141st meridian, while Victoria lies only just past the 123rd meridian.

SOMETHING FROM TRISTAN: (Kenora) We paid a visit to the local skateboard shop in Kenora, called Board Anyone. I picked up a new pair of Independent (the company that makes the trucks) trucks and hardware. 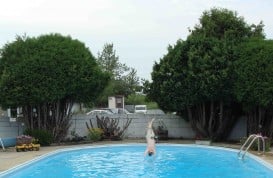 Diving in, at last

We met up with my dad’s friend Willie and once we arrived at his house I went swimming for about two hours because it was just so nice in the pool and there was a diving board. It was better than a hotel pool because it was deep and you can dive in. Tomorrow we are in Winnipeg for the whole day, so hopefully I can add to my skateboard again.