The last word on Miley Cyrus — for now

'Is there anything left to say about Miley Cyrus? Besides, y'know, Eeew" 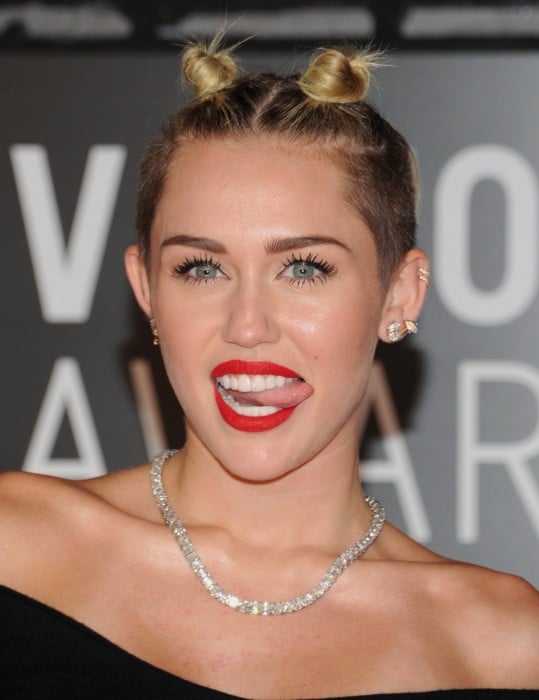 People are still talking about Miley Cyrus and Sunday night’s VMA performance. Here are 10 thoughts, plus a bonus link to the Onion:

“Is there anything left to say about Miley Cyrus at the VMAs? Besides, y’know, “Eeew,” “Will someone please get that song out of my head” and “Where do I get one of those foam fingers for Halloween“?”

“If there is a problem, it’s that the cartoon version of black culture that Cyrus seems to be adopting lacks depth and context. Cyrus has publicly said she wants a more “urban” sound. Her videos have been “accessorised with black dancers” and she uses US street slang like “rachet” (ghetto-diva) in her lyrics. Black culture is more than batty-riding hotpants and weed smoking and for some of those watching, Cyrus’s new persona doesn’t break down barriers, it reinforces stereotypes. Cyrus doesn’t seem drawn to the socially conscious hip-hop or empowering soul but instead she is embracing the “ghetto-fabulous” strand of the black life which leaves many black pundits shaking their heads in despair. The other problem is that I’m afraid she just isn’t very good at it.”

“We are all for feminism, and a woman’s right to enjoy her sexuality, but it is a misuse of feminism to define it as grinding on Robin Thicke amid dancers dressed like species of non-specific plush animals.”

“So what? She’s 20 years old, was thrown into fame at a young age, and is twerking her ass off to shed the Disney image that became her whole identity and probably wasn’t even her choice in the first place? She is also dropping her first adult album very soon and a little controversy never hurts album sales. But just her age is a reasonable enough explanation as to why she’s acting overly sexual in her performances these days. But also that is the world we live in, and until everyone looks away this is what will pass as entertainment on our downward spiral into idiocracy. And if you do not think we are headed towards idiocracy, please see this Buzzfeed list comparing a screenshot of Miley Cyrus’s ass to the backend of a turkey.”

“Cyrus’s twerk act gives minstrelsy a postmodern careerist spin. Cyrus is annexing working-class black “ratchet” culture, the potent sexual symbolism of black female bodies, to the cause of her reinvention: her transformation from squeaky-clean Disney-pop poster girl to grown-up hipster-provocateur. (Want to wipe away the sickly-sweet scent of the Magic Kingdom? Go slumming in a black strip club.) Cyrus may indeed feel a cosmic connection to Lil’ Kim and the music of “the hood.” But the reason that these affinities are coming out now, at the VMAs and elsewhere, is because it’s good for business.”

“Forget Syria. Forget Fort Hood. Forget ObamaCare. America is consumed by Miley.  It’s the perfect media controversy — naughty, sexually charged, celebrity-driven, and not requiring a command of complicated facts. And it possibly signals the end of civilization as we know it — or at least the downward spiral of a troubled young woman. Plus, it’s a chance to revel in her scanty outfit, her tongue-wagging, her twerking, and the suggestive way she was rubbing herself with that foam finger (the better to express disgust, of course). What on earth had happened to the lovable Hannah Montana, the Disney character she played as a teenager?  Over to you, media big shots.”

“She’s trending on Twitter (as are some rude and unnecessary comments about her behind) and her performance will likely supersede this week’s news stories about chemical weapon use in Syria and the massive wildfire plaguing Yosemite. It’s not that I expect Miley to maintain her Hannah Montana, squeaky-clean image. She’s clearly grown up and has the right to express herself. I don’t even take offense to her skimpy outfit. I take issue with how Miley used her (very visible) platform. She triumphantly sings, It’s our house, we can love who we want to … it’s my mouth, I can say what I want to. Rock on, girlfriend. But why not say something a little more worthwhile?”

“This much is absolutely clear: MTV marketed adults-only material to children while falsely manipulating the content rating to make parents think the content was safe for their children. MTV continues to sexually exploit young women by promoting acts that incorporate ‘twerking’ in a nude-coloured bikini. How is this image of former child star Miley Cyrus appropriate for 14-year-olds?”

“What’s truly shocking is that so many people dare to call Miley’s performance shocking. Finally able to break free of the stranglehold of her Hannah Montana days, Cyrus is simply doing what so many young people do — freaking out while desperately seeking an identity of her own. The difference is that she’s doing it in public, for money, so it’s not like this is a surprise.”

Bonus link to the Onion.

… and last word to Mika Brzezinksi and commentary that went viral on Monday morning:

“The whole thing was cringe-worthy, but I feel bad for her. She is a mess. Someone needs to take care of her. Someone needs not to put her onstage and make a complete fool of herself. It was pathetic, desperate, sick. She’s clearly disturbed. She doesn’t look healthy.”