The actress calls the Affordable Care Act a 'socialist Ponzi scheme.' It doesn't go over well. 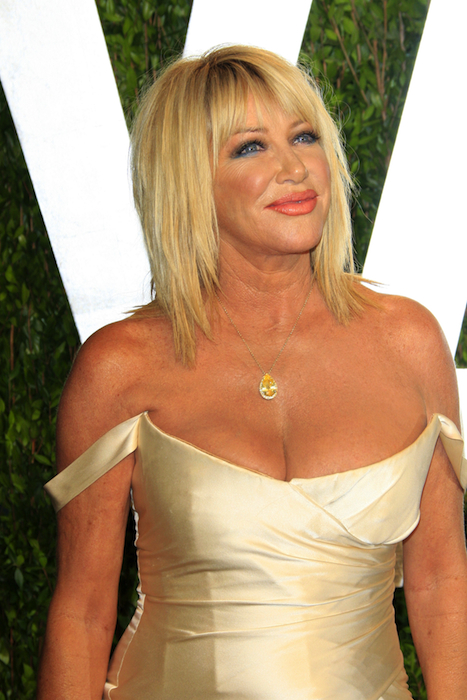 “Medical care will be degraded, the costs will skyrocket, and most frightening of all, your most intimate and personal information is now up for grabs,” writes Somers, in a piece that bears the title ‘The Affordable Care Act Is a Socialist Ponzi Scheme‘ (Tell us what you really think, Suzanne!). Somers also cites, semi-accurately, a 2008 Maclean’s cover story.

Somers’ op-ed was taken to task by writers at The Atlantic Wire and New York magazine (“Whatever she lacks in traditional analytic skills, she more than makes up for with a strong love of freedom,” writes Jonathan Chait), but what garnered the most attention was a pair of quotes attributed to Vladimir Lenin and Winston Churchill — erroneously, it turns out.

The WSJ correction, subsequently appended to the piece: “An earlier version of this post contained a quotation attributed to Lenin (“Socialized medicine is the keystone to the arch of the socialist state”) that has been widely disputed. And it included a quotation attributed to Churchill (“Control your citizens’ health care and you control your citizens“) that the Journal has been unable to confirm.” 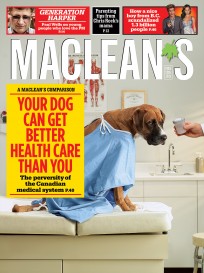 And of course, there’s the dog/horse confusion. Writes Somers in the introduction to the piece: “A few years ago, I was startled to see the cover of Maclean’s, a national Canadian magazine, showing a picture of a dog on an examining table with the headline, “Your Dog Can Get Better Health Care Than You.”

The correction: “An earlier version of this post incorrectly said the photo showed and headline referred to a horse.” (In fairness to Somers, horses did get a mention in the story.)

Somers’ op-ed is published on the Wall Street Journal site under a section dubbed ‘The Experts,’ described by the WSJ as “an exclusive group of industry, academic and cultural thought leaders who weigh in on the latest debates in The Journal Report.”

Reactions to the health care critique were…well, about what you’d expect:

When an American celebrity condescendingly explains your country, is that Canadasplaining? http://t.co/mNSw2vshYD

There's something almost… beautiful about this correction and the editorial disaster that created the need for it. http://t.co/x6qveaDGe5

"Accuracy is the last hobgoblin of the feckless, said Abraham Lincoln." — Suzanne Somers

Wow, these corrections. Perhaps they should also correct that it's in the "experts" section. http://t.co/oroYQXqhI9 (via @ClaraJeffery)