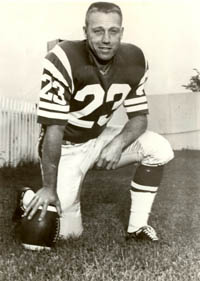 CFL legend Ron Lancaster has died of lung cancer at 69. As a quarterback, he was a true lion, turning the Saskatchewan Roughriders into a perennial contender and leading the team to a Grey Cup championship in 1966. As a coach in Edmonton, he was equally formidable, compiling an 83-42 record with the Eskies. He also saw Canadian football through some of its darkest days, never shrinking from a challenge: in 1998, he signed on with the Hamilton Tiger-Cats despite their chronic financial instability, and coached them into two Grey Cup games, winning in 1999.

The tributes are already popping up everywhere—many of them from people with longer memories than mine. As a former Eskies season-ticket holder, I’ll always think of Lancaster as coach who could adjust his game on the fly. A two-TD half-time lead was never secure against Edmonton, because he would read the opposition’s defence; by the third quarter, he’d have his boys back in the game. Lancaster also understood quarterbacks intuitively, having played the position. “I know how stubborn they can be,” he once remarked in an indirect reference to the ageless Danny McManus, one of many players who profited from Lancaster’s unwavering support. This may explain why Discount Dan, a QB of limited physical gifts, became one of the most prolific passers in league history.

To CFL fans, the Little General will always be great big man.