The long, slow ride from NYC to Montréal 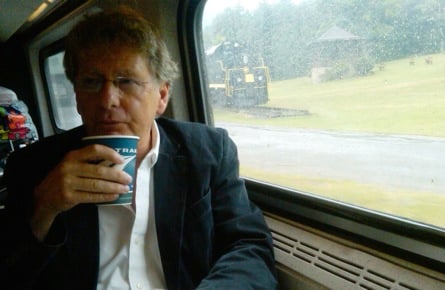 8:15am – Penn Station, New York City
If you believe in high speed rail (HSR), you have to have explored the alternatives. Traveling by plane after 9/11 is not a joy ride. Having to arrive two or three hours early on an international flight, going through security checks and hoping there are no delays has become the routine for air travel. Car travel gives us more flexibility, but aside from observing the scenery and watching out for less scrupulous drivers, there is not much more you can do with the time it takes to get to your destination.

The next 11 hours will be my story. I am traveling on the Adirondack, the daily train operated by Amtrak between New York City and Montréal. It covers a distance of approximately 381 miles. I am expecting outstanding scenery through the scenic Hudson Valley and Adirondack Mountains, and to catch up on my reading. All aboard?

Full disclosure brought me to tell him that I am riding this train to get a feel for the journey. He immediately volunteers that this route would be ripe for more travelers if there was faster service and it did not have to stop at the border.

10:25am – From Poughkeepsie onwards to Albany
My friendly Amtrak agent Jim (the one who thinks I am a reporter) comes to me with a homegrown solution that would shave two hours off the trip. It comes down to pre-border clearance, upgrading speed, eliminating a stop at Yonkers, a dedicated track on the Canadian Pacific line north of Rouses Point and no engine change at Albany. It is still not HSR, but Jim may be on to something.

10:37am – Arriving in Albany
Just spoke with an Indian couple who came to America in 1966 and raised six children, all of whom have been university educated. This charming couple is now retired in Tampa. They love Montréal and are on their first trip by train to this great city. This is what I like about the train—the space to move about and a proper atmosphere for good conversation. Weather and scenery are still good.

12:05pm – Saratoga Springs
We’ve passed Schenectady and are now arriving at Saratoga Springs. The engine change at Albany took at least 20 minutes. All these stops and delays are expected. The thought that crosses my mind, however, is, Why are we still running a railway like we did in a past era and time, even as China, Japan, India and Europe have embraced the benefits of high speed rail?

My coach class neighbours, hearing my talk with Amtrak Jim, agree that we need a rapid train. They tell stories about Europe and Japan. Neighbour Theo tells me you can set your watch by the train from Paris to Lyons. Is this the best that we can do in North America? It seems to be getting slower, and we are still far from the border. Weather and scenery still nice, though!

1:56pm – Leaving Port Henry
You see some beautiful scenery along Lake Champlain despite the current low ceiling and rain. People around me are working on computers, Blackberries, watching movies, surfing the internet, reading a novel or a newspaper, taking a nap, and having conversations on cell phones. Not that different from everyday life off the train. And that’s my point—rail travel provides a sense of normality and can still be an in-thing! All you really need is to give passengers more reasons to use it. Amtrak Jim and neighbor Theo agree!

3:07pm – Making our way to Plattsburgh and the North Country
You might think we are closing in on our destination. Think again. The good news is that we are past the halfway mark. The bad news is that we still have to pass the border and the train stopped outside Westport to let the southbound train pass by. At the border, we can expect a 90-minute wait, says Amtrak Jim.

Neighbor Theo is like me. Starting a vacation and doing an experiment on rail travel from NYC to Montréal. We both agree that Montréal is a desirable destination. Theo is a believer in rail travel. He makes a compelling and persuasive argument for it—comfort, better passenger interaction, and better use of one’s personal time. He is thoughtful and convincing.

As a travel executive, Theo has traveled a lot. Both of us are avoiding complaining about Amtrak. Yet one car has rain seeping in and the toilet does not function. The air conditioned temperature got so cold it was turned off. Now it is feeling stuffy. Can you believe we are in North America, traveling from the great mega-city of New York to Montréal, Québec’s largest city and Canada’s second-largest? And it takes 11 hours? Bottom line, we can’t blame Amtrak, but this rail route can be better. As passengers, we would be willing to pay for a more rapid and a more state of the art rail system. On this point, Amtrak Jim and neighbour Theo agree with me. And Theo would put together a great package tour!

5:50pm – Border crossing
Crossing the border is quite an experience. As many as six agents boarded the train and it was done in record time. Eighty minutes instead of 90! The agents were courteous and asked the usual questions. No incidents. Now we know we have a problem when a train stops for as much time. Think of a car waiting at border crossings on a holiday weekend. But this is every day, without traffic as an excuse. Neighbour Theo tells me that he is flying back.

6:23pm – Nearing Montréal
The trip is slowly winding down. A friend of mine, a journalist, who read my early accounts online, tells me that I am a masochist! Neighbor Theo says he got that right!

There is no doubt that this journey was revealing. Actually more than any masochistic tendencies I may have! Going to and from these two great cities, New York and Montréal, is worth the trip but this is not the 1930s. I still buy all the arguments in favour of rail travel. But a modern, advanced society like ours is expected to do better. My story is coming to an end, albeit slowly. Stayed tuned as we arrive at Central Station in Montréal.

7:30pm – Finally arriving in Montréal!
And we’re 20 minutes late. I will miss Amtrak Jim and I hope he will enjoy the benefits of HSR some day. He hopes so, too. “But get pre-boarding customs clearance done, John,” he says as he waves goodbye. Neighbour Theo says goodbye to me as well and tells me again that he will fly back.

More than ever, I am convinced that a high speed rail connection from Montréal to New York is the way to go. There is much to do and so much in common between those two cities. I will most likely never see Amtrak Jim and Neighbour Theo again, but our parting looks said it all—we shared an experience we know could be so much better.

I’m now home in my city for a brief vacation after an 11-hour journey! Throughout the trip, my dear Esther worked on her computer, patiently indulging my desire for a fuller understanding of this long, slow train ride. Now it’s time I take her out to dinner. She’s earned it!