Does an entire generation of young people have no future? Your thoughts here.

Last week’s cover story, “The New Underclass: Why so many smart, educated, ambitious young people have no future” hit a nerve with readers. Some thought it was dead on, others thought it was exaggerated, arguing that there are jobs out there. Here are some of the best responses sent in by mail, email and through social media: 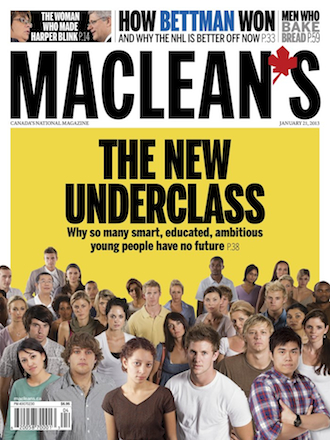 Thank you for shedding some light on the way our education system has failed Canadian students (“The new underclass”, Society, Jan. 21). When I retired from the skilled trades a few years ago, the average age of tradesmen in Ontario was approaching 58 years of age. Yet still the education system was promoting a university degree as the best path forward. Skilled trades in Canada have been stigmatized by our education system, and it really came to a peak when special needs students came into the public education system and they were channelled into the “technical stream” and called something like “life skills.” That ended any interest normal students might have developed in following the technical stream as a path to the skilled trades.
Dave Bradley, Cargill, Ontario

During my 20-year career as a college professor, I observed the steady obsession by community colleges to become second-rate universities in staffing requirements, course content and political posturing. As well, my exposure to universities’ academic practices allowed me to learn of a fatal flaw in their philosophies of management. As an invited participant in committee processes at university, I was told what the students did with their education upon graduation was not a concern of the university, and that my recommendation of a “needs assessment” for a proposed new degree was not relevant or required. So now today’s students are processed by factory-like institutions that focus mainly on their own marketing-driven management mandarins. We must better define the specific roles, behaviours and outcomes of these publicly funded institutions. A structural and philosophical paridigm shift of the utmost magnitude is in order.
Neil O. Foster, Algonquin Highlands, Ont.

Thank you! You have no idea how great it felt picking up your Jan. 21 issue. Being part of the Generation Y cohort, I seriously almost cried. It finally felt like I had a voice. My generation’s plight will hopefully be heard, thanks to articles like this. It really hurts to be labelled as a bratty, entitled generation when we did everything asked of us. Is wanting the same middle-class lifestyle enjoyed by our parents and grandparents really too much to ask for?
Rishu Khan, Mississauga, Ont.

When I read “The new underclass” I felt very fortunate. I am a third-year agricultural business major, and ever since my first year, I have been working in my field. I’ve had five job offers for this summer in my field. I have no doubts about employment in a position I will enjoy after graduation. Our college graduates 300 agricultural students a year to fill 900 jobs available; employment within a year of graduating is 100 per cent in our field. The sad reality is, most students who grew up within city limits do not see agriculture as a viable option, because when they think agriculture, they think of a farmer breaking his back plowing and wrangling cows. The agricultural industry is very big business throughout the world and one that provides growth for innovative, educated and passionate young people in its field.
Marin MacNamara, Grand Valley, Ont.

Many young people either have no real marketable skill or the skill they do have is not demanded by society. There’s also the fact that so many retired people with excellent benefits and pensions, such as teachers, are taking jobs away from the young, which is most unfair. My husband knew a man who, while holding down a full-time government job, was collecting five good pensions. When my husband applied to the Bentley School of Accounting in Boston many years ago, which was one of the best in the United States, their slogan was, “We will teach you how to make a living, you can get educated on your own time.” Maybe our educational institutions should adopt the same philosophy. At least it would save a lot of people a lot of money.
Dolores Murray, Sarnia, Ont.

Why do so many young people have no future? We have lost a large amount of our manufacturing. No economy can function properly without an adequate level of manufacturing. Every Western country has the same problem and needs the same solution.
Edward J. Farkas, Toronto

As a mother of four, two of whom are in their early 20s and another two in high school, I was disappointed that your story suggested our young people have “no future.” My husband and I graduated in the mid-’80s. He worked as an engineer and I worked in advertising. Between us, we were able to rent a basement apartment. We still lived there when our first daughter was born in 1988. We continued to live in rented accommodation after our second daughter was born; I walked to a laundromat, kids in tow, for years. Those were tough times, but we lived frugally and when the housing market took a dive in the early ’90s we were able to buy one-half of a modest duplex. Many years, later, we were able to buy a detached home in a nice neighbourhood. It hasn’t been easy, but it has been rewarding. Canadian youth should know that there is a future, regardless of your background or level of education. Work hard, think creatively and be flexible, and you’ll be surprised at the riches life has to offer.
Heather MacDonald, Ottawa

Young people today are a product of parents’ obsession with only a university education. My own son went to community college for one year and then became a heavy duty mechanic apprentice. Now going into his third year of apprenticeship, he earns $65,000 a year before any overtime and he regularly receives unsolicited job offers. I am confident that he will not be a member of your new underclass.
Paul Schroeder, Winnipeg

The opening sentence of this article claims that “Melanie Cullins is no pipe dreamer.” Oh really? This 28-year-old you profile has no job, a husband doing contract work, no benefits or pension, two babies and she still expects to own a home in one of Canada¹s most expensive cities and get a job making the amount she would like to make in a job she would like to have. If this is not a pipe dream, I don’t know what is. If the expectation of the boomers’ children is to all live like this in their twenties, Canada is in real trouble. Later in the issue you point out careers where numerous jobs can be found. It is a shame it takes a magazine article to tell these people what industries the jobs are located in.
Jeff Brisbois, Port Williams, N.S.

The current blame for this problem is shared by all facets of our community: parents who expect their offspring all to be leaders, professionals, and rich but not have to get their hands dirty; educators who attract students with false promises of a bright future while offering underwater basket-weaving courses to expand their institution’s population with no emphasis on what it takes to “earn a living.” We need to require all high school graduates to work for two years prior to further higher education. Teachers should have experienced several facets of commercial life prior to entering the teaching profession. All employers of 10 skilled persons should be required to train one apprentice. Encourage the colleges and universities to teach practical courses that will result in gainful employment, and minimize financial support for students taking non-commercial courses. Explain to parents that there is no shame in living a life of basic rewards for meaningful work. The future of Canadian society as we know it will depend on getting this problem solved.
Brian Riden, Stirling, Ont.

You quote a professor of labour studies from McMaster University, who himself was in university for over 10 years, as saying “the risk of trade jobs is that technical change comes along and wipes out your trade.” All the technology in the world is never going to replace someone who can tape drywall, fix your furnace or climb hydro poles.
Evan Bates, Parry Sound, Ont.

Much of the bad news for today’s youth has been apparent for some time: the high levels of student debt, the underemployment, and the lack of skilled trades workers. What really shocked me, though, was the continuing disparity in earnings between men and women in the same profession (“The million-dollar promise,” Society, Jan. 14). What year is this again? In order to become a civil engineer, a nurse, a lawyer or a pharmacist, women and men follow the same curriculum, write the same exams, and pay the same tuition. It seems to me that tuition for women should be lowered to reflect the wage gap they will face upon entry into the workforce.
Mary Mackay, Ottawa