The Petraeus affair: It's 'Mean Girls' for people with jobs

And not so much about the personal indiscretions of public figures 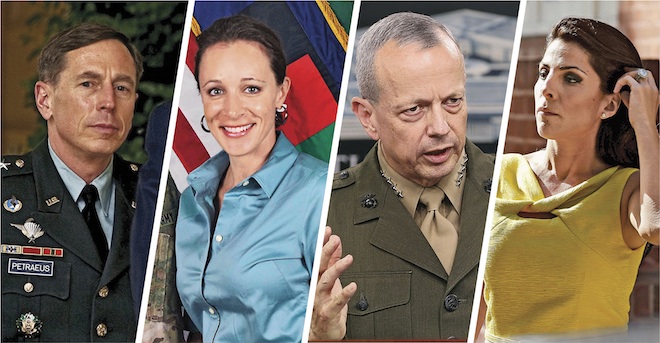 You know when scandals erupt in the media about teens “sexting,” cyberbullying, and sharing lewd photos on the Internet, and everybody asks, “Where are the parents?” Well, now we know the answer: they’re doing the exact same thing. Enter the David Petraeus affair, or Call of Booty, as video-game enthusiasts have labelled it: the most complicated military drama of all time, a soap opera on steroids, harder to parse than seasons four and five of Desperate Housewives combined. The FBI is currently compiling a timeline of their probe that revealed the beleaguered American spy boss’s extramarital affair; one they’ve probably had to update on the hour. (As you’re reading this, I’m sure new news will have already broken, this time involving Petraeus’s dog, or maybe a love child.) However, allow me to give you a brief rundown of the story, as it stands while I write this:

Beloved military leader and, until very recently, director of America’s Central Intelligence Agency, David Petraeus, resigned last Friday after he admitted to having an affair, reportedly with his biographer: 40-year-old married mother of two, Paula Broadwell. The FBI began its investigation of Broadwell in June, when Tampa Bay socialite Jill Kelley reported that she was receiving anonymous emails from an apparently jealous woman. The FBI allegedly traced the emails to Broadwell. Her online activity revealed that she was having an affair with Petraeus (it appears the two shared a Gmail account and conversed through unsent email drafts—a common practice among terrorists and teenagers alike.)

Broadwell was likely under the impression that Petraeus was smitten with Jill Kelley, which Kelley denies, though she has yet to explain the approximately 30,000 pages of emails the FBI discovered she had exchanged with Petraeus’s military successor in Afghanistan, Gen. John Allen. Meanwhile, an unnamed FBI agent emailed Kelley a shirtless photo of himself (to prove he has a bigger six-pack than Gen. Allen, perhaps?). In short, Petraeus resigned. Allen may have to as well, because adultery is illegal in the U.S. military. And stay tuned, because Broadwell and Kelley have both lawyered up (word’s still out on the shirtless agent).

So what now? This is the part where I’m supposed to make a sweeping moral statement—about the price of personal indiscretion in politics, or the media’s love of lionizing public figures and abandoning them when they fall from grace. But all I can think about is the fact that Paula Broadwell was voted “most likely to be remembered” in high school (would that the yearbook committee took bets). This entire thing is like some sick and twisted, military-infused version of High School Musical: Petraeus, the thoughtful jock—quarterback and class president—risks it all for a nerdy junior, who turns around and accuses the prom queen (Jill Kelley) of stealing her man. Prom queen enlists weird smart guy (shirtless FBI agent) to clear her name, and ends up implicating herself in the process (apparently she was cheating all along?.?.?.?with somebody else.) It’s a crime no one has bought the movie rights.

It’s also a crime, of the same order, that we even know about this. Broadwell’s allegedly threatening emails to Jill Kelley weren’t Fatal Attraction threatening. They were Mean Girls threatening. According to Michael Daly, writing in the Daily Beast, a source “who was until recently at the highest levels of the intelligence community and prefers not to be identified by name” (shirtless FBI agent?) compared Broadwell’s anonymous emails to a “cat fight.” This is the source’s impersonation of Broadwell cutting up Kelley via email:  “Who do you think you are??.?.?.?You parade around the base?.?.?.?You need to take it down a notch.” Pretty scary stuff. “No ‘I’ll kill you’ or ‘I’ll burn your house down,’ ” the source told Daly.

Some agents were confused as to why an investigation was even necessary in the first place. Glenn Greenwald, writing in the Guardian, argues that Broadwell’s allegedly threatening emails were “more benign than what regularly appears” in his own inbox. What’s remarkable, then, isn’t that Petraeus risked it all for a biographer with a crush, but that we know about it. And why.

At the end of this saga, powerful people will lose their jobs, marriages will dissolve, and the American press will never forgive a man they pardoned time and time again. But that doesn’t change the fact that a massive political scandal didn’t break slowly after months of painstaking investigation. It was an accident, bought cheaply by a very attractive woman with a little bit of social capital. According to Daly: “What tipped it may have been Kelley’s friendship with the agent.” At the end of the day, all the world’s a high school.