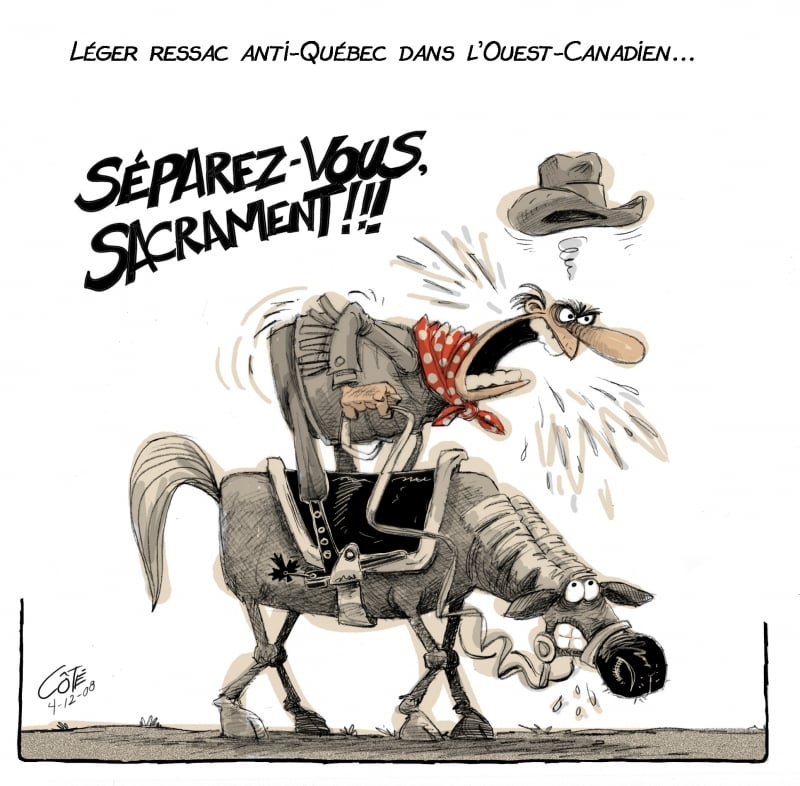 If you haven’t read the National Post‘s editorial about the canceled re-enactment of Battle on the Plains, it’s worth checking out, if only because it stands out as a perfect example of the breathtaking lunacy Quebec’s identity debates sometimes generate in the Rest Of Canada. To wit:

Enough of the decades of appeasement; it’s time for Ottawa to adopt a tough-love attitude toward Quebec. And who better to do that then Mr. Harper and his Tories? They’ve got nothing to lose…

They can start by reinstating the Plains of Abraham re-enactment and, if need be, providing federal security for the event. They also can end the unofficial federal policy that as near to half as possible of all federal defence spending must go to manufacturers in Quebec.

While they’re at it, they should tell the truth about equalization… There is no “fiscal imbalance,” at least not between Ottawa and Quebec…

Let’s also take away the Quebec chair at the Francophonie. Defend vigorously in court any challenges filed that seek to uphold the minority-language rights of English-speaking residents in Quebec. Such an approach won’t make any friends in Quebec. But at least everyone in the rest of the country won’t keep feeling like suckers.

So, if I’ve got this right, the National Post believes the reasonable response to Quebecers’ getting their panties in a twist over, as Adam Radwanski aptly puts it, “a bunch of history buffs [running] around in costumes,” is to dramatically and irreversibly raise the stakes. English Canadians apparently deserve to be made aware of the conniving, money-grubbing, power-hungry opportunists living next door—and Quebecers as a whole should be tarred and feathered for not knowing their place in the federation. What’s most astounding about the Post‘s editorial is the paper’s suggestion that the “rest of the country” would somehow embrace collective punishment against Quebec as appropriate retaliation for the rantings and ravings of a bunch of kooks no one except the National Battlefields Commission pays attention to.

Aside from the dubious implications of the Post’s suggestion, if the paper is going to rely on history to make its point, it should at least get it right: Pierre Trudeau didn’t “placate” Quebec nationalists with the Charter or bilingualism; both were imposed against their oft- and loudly-expressed will. And Quebecers weren’t the ones who turned Meech Lake and Charlottetown into failures; if anything, Meech Lake was derailed by widespread anti-Quebec bigotry, while Charlottetown’s main opponents weren’t nationalists but die-hard federalists.

While I’m happy to see the editorial denounced by others in the ROC, I’m not sure I agree with Radwanski’s contention that the biggest problem with the Post‘s editorial is that it’s “asking the federal government to reignite the sovereignty movement.” You can take the sovereignists out of the picture entirely and it’s still a despicable idea to encourage a government to drum up a backlash against its own citizens.